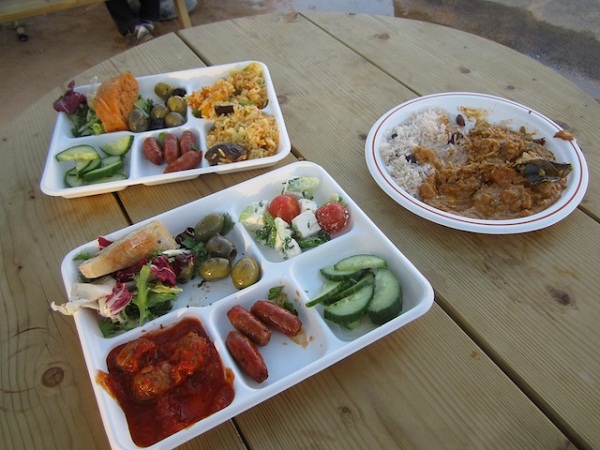 The 2012 Olympic Games that was hosted in London might have attracted the attention of millions of viewers and visitors from around the globe but the sort of catering that was carried out at the venue left much to be desired. The food being served did not manage to impress foreign visitors. The best fare yet seemed to be traditional examples of the kind of food being served at sports arenas.

According to Jesus Bernal, the Mexican dishes being served did not appear to be anything like actual Mexican food. The 29 year old who hails from Mexico City had ordered tortilla chips, salsa and guacamole from a concession stand right in front of the basketball arena, which was then served to him in a cardboard box. Just by looking at the dish, Bernal claimed, one could make out that it was from the United States. Too little guacamole was served and the taste of the salsa was sweet. He assured that Mexican citizens would not be insulted by this issue but added that it was clear the people preparing the dishes had no idea about Mexican cuisine. Bernal and company were decked out in traditional gear and were sampling the results of one of the largest ever catering projects at the Olympic venue where more than 200,000 fans required food on more crowded days. Bernal recommended that the organizers might have used actual ingredients used in Mexican cooking.

Jan Matthews, the person in charge of overseeing the catering operations, claimed that her team had been inspired by the flavours found in Borough Market which usually said to be London’s go-to location for food aficionados.

Bad fortune was in store for most outlets this week as many of them ran out of major ingredients right in the middle of lunch time. There were no tapas available at the tapas stand. Also, there was a shortage of chicken, cheese, red peppers, jalapeno peppers and tacos at the Mexican stand. There was lack of milk too in some outlets. Organizers were attempting to enhance the supply chain.

A lot of people, however, decided to play it safe by making a beeline straight for the largest McDonald’s in the world or standing in queues for almost half an hour just to get their hands on some crispy fish and chips. Business was booming as people found this sort of food to be not only fresh but fit for consumption by children.

Temporary champagne and seafood restaurants serving rack of lamb, salmon carpaccio with asparagus and Eton mess had been set up for people who prefer a sit-down meal capable of satiating their appetite, all for £34. But these offerings had not been much of a hit with customers. Criticism came from a lot of quarters not only about the preparation of the dishes but also their presentation.

People seemed to be happier with the quality of fast food like hot dogs and lager, than with the high end dining experience. Vegetarian food also grew in popularity.