The clean energy hub in the North Sea is set to be the largest infrastructure project in the country's history.

So Finger-Licking Good… The World’s Most Coveted Restaurants.

Last year, Denmark, the European Union’s largest oil producer, pledged to cease all oil and gas exploration in the North Sea by 2050, the same year the EU has targeted to become the world’s first climate-neutral bloc (i.e., achieving net zero carbon dioxide emissions). Now it is embarking on a green revolution unlike any other. The Danish government and Hvidovre, a city outside Copenhagen, are developing an archipelago of nine artificial energy islands to house a new leisure and tech hub. The new archipelago, dubbed Holmene, is the biggest infrastructure change to the city’s coastline since the 1960s.

“I think this could become a sort of European Silicon Valley,” said Brian Mikkelsen, the head of the Danish chamber of commerce, in an interview with The Guardian.

An archipelago of green energy islands

The VindØ consortium of PensionDanmark and PFA, and utility company Andel in a video showed how the artificial island could look if it is built as planned by 2040. The Danish archipelago is scheduled to kick off in 2022, with the first island being habitable in about six years. 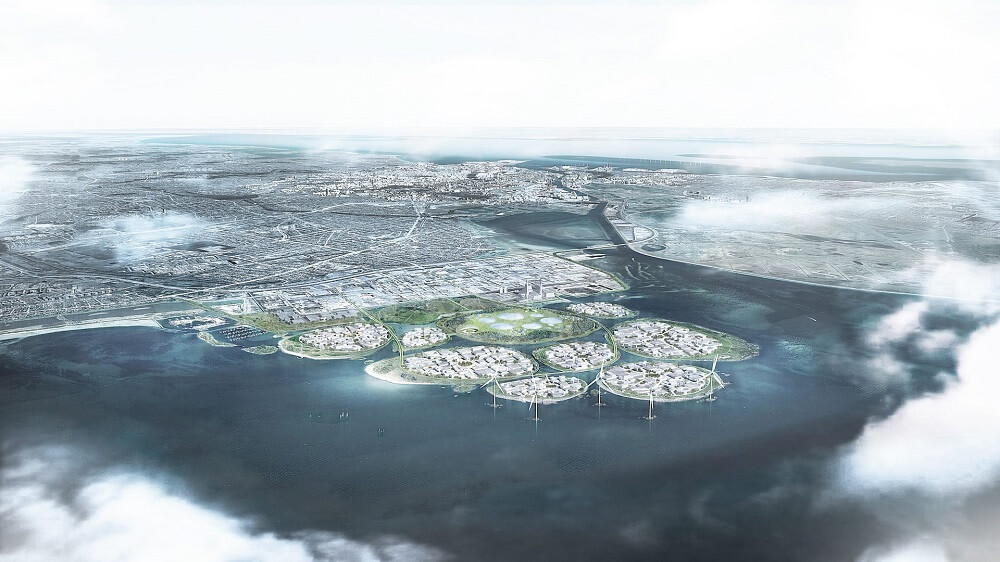 The Holmene Project has been deemed as the “largest and most ambitious land reclamation in Scandinavia.”

Holmene – the 9 energy islands will span across 33 million square feet of new land – that’s about the size of 20 football fields. It will be located some 20 miles of the Hvidovre coastline and will produce and store enough clean energy to cover the electricity needs of 3 million Danish households.

The island hub will have a potential capacity of 10 GW, as part of the EU’s strategy to increase the total offshore wind capacity to 300 GW by 2050 from the current level of 12 GW.

According to Mikkelsen, the energy islands have the potential to lure 380 companies in biotech, pharmaceutical and life sciences sectors and create as many as 12,000 new jobs. 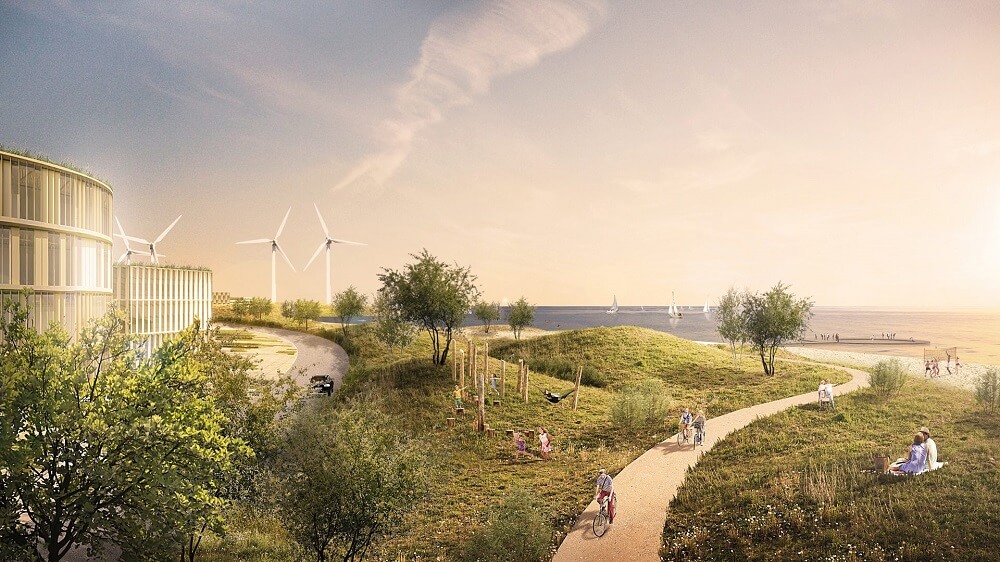 Urban Power, an architecture firm based out of Copenhagen, has deemed it “the largest and most ambitious land reclamation in Scandinavia.” The architecture studio has incorporated a series of flood barriers around the manmade archipelago in Denmark to combat the threat of rising sea levels, alongside a number of islets and reefs to boost the region’s marine biome.

The Holmene tech hub will be surrounded by 200 to 600 massive wind turbines – each taller than the size of 600 ft. Since the archipelago will be 50 miles off the west coast of the Jutland peninsula, the wind turbines can be large than ones onshore, and they can also access higher wind speeds more efficiently.

In the first phase, the energy islands will provide electricity to 3 million households. The plan is to expand the size until it triples to 9 million households in Denmark and neighboring countries (including Holland and Germany). Massive batteries will be added to the Holmene islands for storage and supply of clean energy.

The Danish archipelago will be the world’s first clean energy hub, harvesting and distributing energy from multiply offshore wind farms simultaneously. It will also host the biggest waste-to-energy plant in Europe where the bio and waste water of approx. 1.5 million people will be transformed into clean water and biogas. 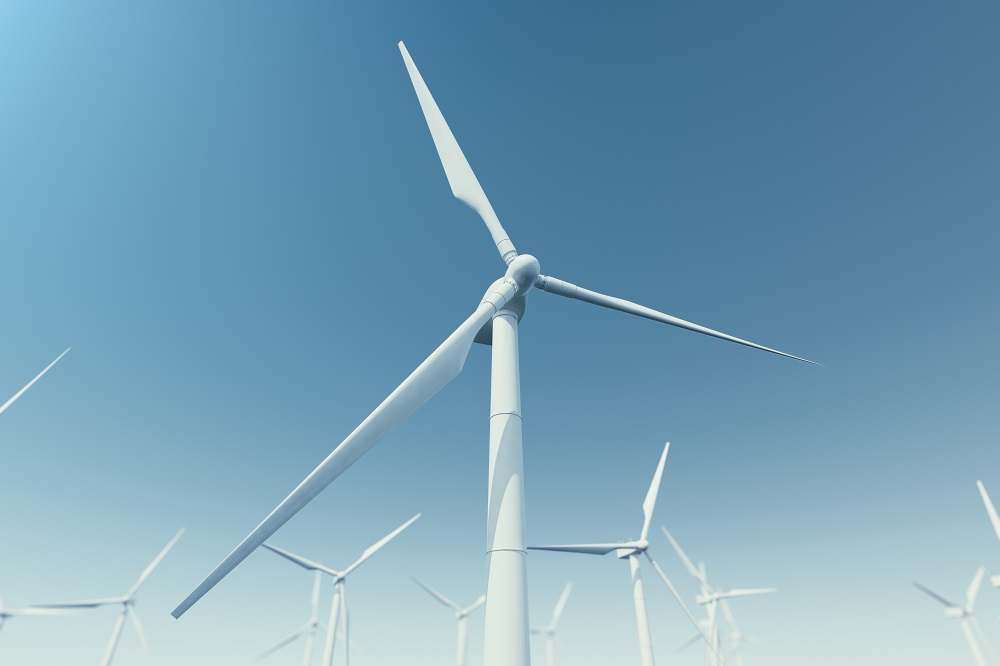 The Holmene tech hub will be surrounded by 200 to 600 massive wind turbines – each taller than the size of 600 ft.

The manmade island hub will be funded both by the Denmark’s government and companies in the private sector that will partner with it. The cost of the energy islands in Denmark could go north of $34 billion and will be the largest infrastructure project in the country’s history. If all goes well, a second energy hub will be added later on the Danish island of Bornholm in the Baltic Sea. It will have a total capacity of 2GW.

The Holmene Project is Denmark’s plan to rapidly cut greenhouse gas emissions by 2030. The Scandinavian nations wants to speed up its transition to become the world’s first all-renewable energy grid.

The European Union is also in the process of developing a 90-m high Sponge Mountain made to absorb CO2 in Turin, Italy. The green energy proposal by Amsterdam-based architect Angelo Renna will also act as a leisure hub where people can go for a walk, run or play with their pets.

Anna Domanska
Anna Domanska is an Industry Leaders Magazine author possessing wide-range of knowledge for Business News. She is an avid reader and writer of Business and CEO Magazines and a rigorous follower of Business Leaders.
« SoftBank Rides Recovery on Vision Fund Performance
Total’s earnings in Q4 improve as oil prices stabilized »
Leave a Comment
Close