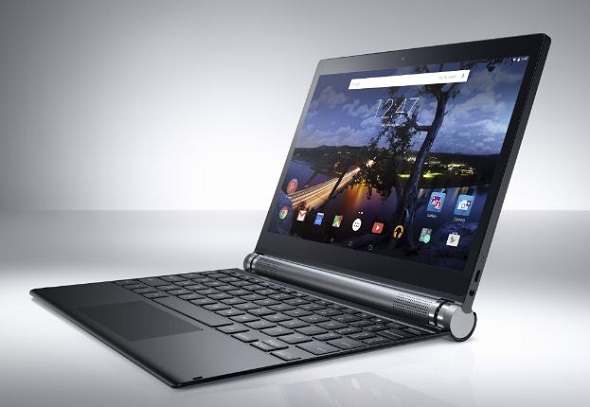 After successfully launching the ultra-thin Venue 8 7000 tablet in Australia earlier this year, Dell has yet another gorgeous tablet for customers to consider. Dubbed as Venue 10 7000, a relatively high end device that comes with Intel Atom processor and focuses at business that enables users to separate work data from personal data.

The Venue 10 7000 sports a 10.5-inch OLED screen and displays images at a resolution of 2560 x 1600 pixels. Like its predecessor, the device is powered by the same 2.3GHz quad-core Intel Atom Z3580 processor along with 2 GB of RAM. Dell Venue 10 7000 comes with 16GB of internal storage, which can be expanded via microSD card slot allowing users to add cards up to 512GB in size. The tablet comes with a dimension of 6.2mm thickness and weighs nearly 598grams and has an aluminum build and a substantial cylinder along the side that houses the battery and stereo speakers.

On the rear, it contains 8-megapixel Intel RealSense 3D camera setup from the Venue 8 7000 as well. This allows the user to spot the objects and capture length, width and also depth in a photo. They can also adjust the focus of the image after the picture is taken.

The measurement tool can also be used to measure the length of an object or the height of a person, which could prove useful to interior designers, real estate professionals and other workers who are required to take measurements in their field of work.

One notable difference is the sizable 7,000mAh battery, up from 5,900mAh. According to Dell, the device provided nearly seven to ten hours of battery life. The tablet will run Android 5.0 on a quad-core Intel Atom chip code-named Moorefield. Other features include a 2 megapixel front snapper, 802.11ac Wi-Fi and Bluetooth 4.0.

Since it is a premium tablet, its starting price is $499 which also gives 16GB of storage. For $629 users can have an attachable keyboard as well.

The Venue 10 7000 comes with a larger screen and keyboard attachment, which can be used as a laptop to get work done, mainly with support coming for Microsoft Office for Android, said Kelli Hodges, a manager at Dell. Initially Dell contemplated using Windows for the new tablet but the OS didn’t support the Moorefield processor or the OLED screen, Hodges added.

The tablet will ship worldwide in the next coming weeks, a Dell spokeswoman said in an email.