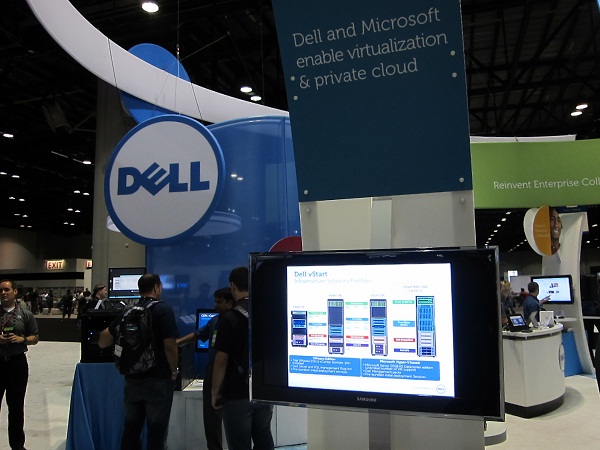 Dell Inc. revenue and income dropped in the second quarter.  As a result of weak results Dell decided to cut its third-quarter and full-year profit outlook. Currently customers are reducing their spending on computer purchases as they are waiting for the introduction of Microsoft’s Windows 8 Software. But Dell is not the only one affected by the decreasing trend; the whole PC business continues to struggle as a sluggish economic recovery immerges demand for personal computers.

Dell reported an 18 percent fall in earnings for its fiscal second quarter and the revenue which surprised analysts as it missed their estimates.  Dell forecast says that the revenue in the current quarter will drop 2 percent to 5 percent from the previous three-month period.

According to Dell executives, the company’s second-quarter results also contain data which shows that in some area the success was achieved; Dell solution and services sales in both enterprises and small and midsized businesses gained; for example overall enterprise solutions revenue increased 6 percent, to $4.9 billion. In addition, company’s own storage products jumped 6 percent and, as it was stated by Michael Dell, the company hoped that storage would increase faster.

Dell has to face smaller demand for PC purchases in emerging markets, but almost every tech. company has to struggle with this problem.  According to data, overall consumer sales dropped 22 percent compared to the same period last year and consumer notebook revenue was down 26 percent. In addition, sales of mobile devices fell 19 percent, desktop revenue dropped 9 percent and growth market sales fell 11 percent.

Accordingly, overall revenues dropped 8 percent, to $14.4 billion, and net income fell 18 percent. Those financial results forced Dell executives to change the forecast for the second half of the year and full-year forecast as well as to reduce Dell revenue forecast for the ongoing third quarter, stating that sales would drop 2 percent to 5 from the previous quarter, to $ 13.8 billion to $14.2 billion.

Challenges ahead of Dell

Brian Gladden, chief financial officer at Dell, noted that “the second half (of the year) is a little bit more challenging” as everyone is waiting for the Windows 8 release.  Declining PC sales forced the change of Dell forecast despite the fact that enterprise revenue growth is said to continue.

Dell tries to aggressively expand its efforts in both enterprise infrastructure and services. But up to date any successful achievement in these areas has been offset. Current Dell problems are caused mainly by the continual worldwide decrease in PC sales, which still make up roughly half of Dell revenues.

However it should be highlighted that Dell, the second largest the U.S. maker of personal computers, is currently in the process of transformation itself from a typical PC maker to a high-quality enterprise solutions and services provider. Dell wants to increase its capabilities in software, storage, networking and services and at the same time develop features in PowerEdge server Portfolio. All of these changes have to be made as Dell struggles with the growing popularity of smartphones and tablets.