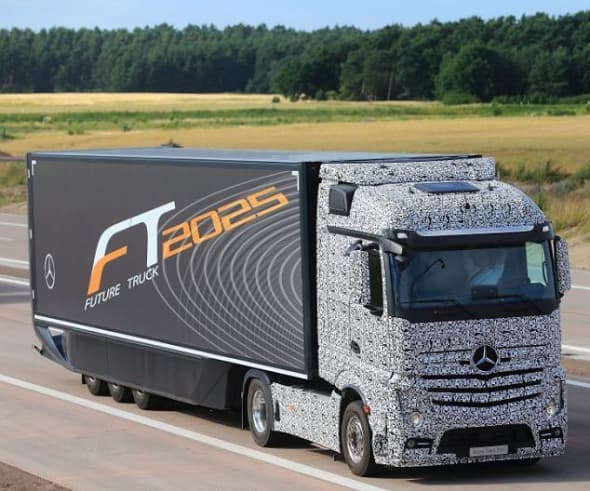 Automotive group Daimler has cast a light on the future of the global truck industry by unveiling the prototype of the “Mercedes-Benz Future Truck 2025″, the world’s first driverless truck.

On Thursday, the highly advanced prototype was demonstrated to the media, industry experts and government agencies along a 30-kilometre stretch of the A14 autobahn near Magdeburg, west of Berlin. Daimler Trucks says the prototype, which could possibly be available in production form from as early as 2025.

The demonstration was carried out in controlled but realistic driving conditions, the truck often surrounded by several other vehicles. The heart of the truck is the ‘Highway Pilot’ system that allow for autonomous driving at a set speed of up to 85 kilometers (55 miles) per hour.  The truck monitors its surroundings with the help of four radar sensors plus a stereo camera, vehicle-to-vehicle (V2V) and vehicle-to-infrastructure (V2I) technologies and makes perpetual little adjustments to its steering while maintaining a distance of 60 metres from the nearest vehicle ahead. The system also includes information about ongoing traffic, the lay of the area and road conditions to allow for autonomous driving.

The driver is then free to press a button that shifts his seat back and can then relax or attend to other matters through the tablet touch screen that serves as the vehicle’s main control and communications device during the journey.

While Highway Pilot takes full control of the truck, it cannot change lanes or perform overtaking manoeuvres. To overtake a moving vehicle the driver must take manual control. The driver can override the Highway Pilot at any time to take back full control by steering, braking or accelerating as required.

Daimler says the fully networked driving environment will cut down the number accidents that were previously caused through driver error. Furthermore, the future technology will mean vehicle speeds can be controlled to better traffic inflow and minimize fuel economy, while for trucks self driving will also improve scheduling.

Dr Wolfgang Bernhard, the member of Daimler’s Board of Management responsible for Daimler Trucks and Buses, said a critical phase for the progression of autonomous driving now rests with government regulators. While the truck maker is confident that its technology can tackle regulatory and legal barriers, even if the wage and fuel savings on offer leads to clash with freight unions in the long run.