Cybertruck can be heated to spectrum of colors

Tesla’s Cybertruck might be able to get new body color options seeing as creative fans are increasingly imagining up new versions of it.

The enthusiasm of Tesla fans for Cybertruck has been rekindled once again as its CEO Elon Musk confirms that the truck’s surface color could be changed using heated colors. At present, Tesla Cybertruck is only available in natural steel color but it has been freshly revealed that scientifically one can get different colors by heating the steel.

The Cybertruck primarily comprises of an exoskeleton body built from exposed steel. This has been basically done so that the lack of stamped body panels help to eradicate dents, small damages and long-term corrosion. Hence, surrounding this idea a lot of discussions have been carried out regarding it color options since it consequently limits the color options to wraps.

However, potential customers and Cybertruck enthusiasts have been continuously making this small request for diverse body color options. Although, Elon Musk has previously denied it or refused to comment on this possibility, but in a new tweet the maker has indicated that heat-treated colors could be a possibility. 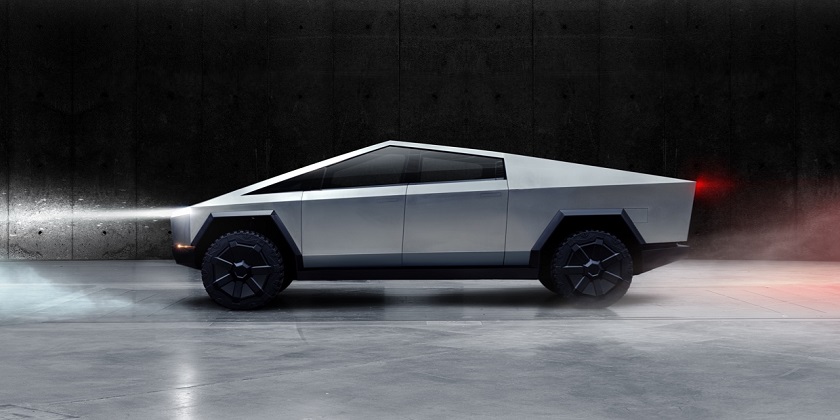 The alternative option that was suggested uses different temperatures to affect the metal’s chemical coloring, creating a spectrum of color possibilities from yellow to red and blue. This idea is achievable since the metal used on Tesla Cybertruck’s body is ‘cold-rolled 30X stainless steel’ which changes its color after being heated at a certain temperature.

This revelation took place over a series of tweets exchanged between some Cybertruck buffs and Elon Musk himself. At first, the CEO responded to a comment via twitter that it wouldn’t be impossible to get a Cybertruck in ‘white oxide’. However, later he directly established the likelihood that the Cybertruck’s cold-rolled steel body could be heated to get different colors.

It is, nevertheless, still unclear from the tweets by the Tesla founder whether the color modifications would be a job done aftermarket or whether Tesla could offer a solution of its own. All the Tesla supporters are wired and hoping to hear more as the Cybertruck inches closer to production. The vehicle is currently slated to hit the market in late 2021.

What is the Tesla Cybertruck?

The, possibly polychromatic, Cybertruck is a newly announced and yet to be released on ground venture by Elon Musk aiming towards sustainable energy goals. It is an all-electric, battery-powered, light commercial vehicle launched by Tesla, Inc. As of now, there has been an announcement of three models, with Environmental Protection Agency (EPA) range estimates of 250–500 miles (400–800 km) and an estimated 0–60 mph time of 2.9–6.5 seconds, depending on the model.

The vehicle will reportedly use self-leveling suspension which compensates for variable load and some models will also have all-wheel drive. The other regular features include on-board power inverters for supplying both 120 and 240-volt electricity, permitting use of power tools without a portable generator. There is also an inclusion of an air compressor for powering pneumatic tools. The unique, eye-catching natural exterior made of stainless steel sheet-metal is supposedly bullet-resistant against 9 mm caliber bullet.

In terms of its design, the Cybertruck employs a unibody construction which is termed an “exoskeleton” by Tesla. It is like most passenger cars, rather than the body-on-frame construction which is typical of trucks. This was because a standard vehicle frame would conflict with the under-floor battery pack. It deploys uncommonly thick 3 mm 30x-series, cold-rolled stainless steel body panels, which cannot be stamped like conventional automobile parts. These panels can only be bent along straight lines, which leads to a very distinguishing faceted design and has been called ‘low-poly’ or otherwise as origami. This material is the same as SpaceX uses on their Starship, since it dispenses stress more evenly and allows for added interior volume.

With new creative possibilities opening up for the Cybertruck frequently, it is expected to create a great market of aftermarket mods and appurtenances.