Creative Entrepreneurship: How Can You Think Outside Of The Box?

Did you know that Michelangelo wanted nothing to do with Sistine Chapel? In 1510, when 33-year-old Michelangelo was asked by Pope Julius of Rome to decorate the Sistine Chapel’s ceiling, he was reluctant. For one thing, he considered himself a sculptor rather than a painter, and he had no experience with frescoes. For another, the biggest challenge was fitting human figures into the traingular spandrels on the ceiling. To paint a picture on a curved ceiling split into sections required amazing imagination and the ability to adapt to perspective distortion. Young Michelangelo was ambitious but the Pope was asking for too much. If he failed, all his errors would be on display for the rest of the Rome to laugh at.

Working on the Sistine Chapel

To overcome the limitation, Michelangelo for the first time used the fresco painting technique. He first had to learn the technique to create the twelve Apostles and some filler decorations. But, soon he realized the ceiling wasn’t going to look magnificent enough and so he obtained permission from the Pope for something more ambitious. Michelangelo then came up with a vast painting of three hundred figures illustrating the nine scenes from the Book of Genesis. 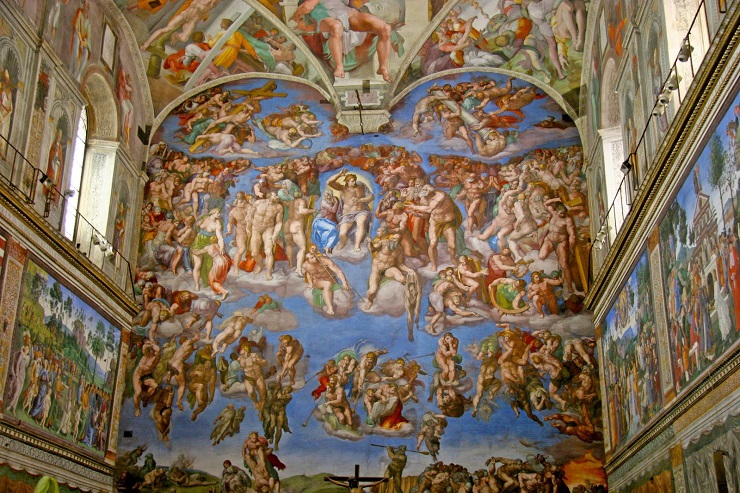 Michelangelo and his assistants used wooden scaffolds that allowed them to stand upright and reach above their heads. In fact, to reach the chapel’s ceiling, Michelangelo himself designed the scaffold, made out of a flat wooden platform attached to the walls with brackets built out from holes in the wall near the top of the windows, rather than being built up from the floor.

The Sistine Chapel project was so physically demanding, that Michelangelo wrote a poem about his two years of misery. “I’ve already grown a goiter from this torture,” it read, “stomach’s squashed under my chin,” that his “face makes a fine floor for droppings,”he went on to complain. “I am not in the right place—I am not a painter,”he ended with the note that he shouldn’t have changed his day job as a sculptor.

Why Is Creativity So Crucial?

Twelve years later, another Pope hired Michelangelo to paint him the front wall of the same chapel. Michelangelo painted The Last Judgement, between 1537 and 1541.

Today, Rome’s Sistine Chapel remains to be one of the most iconic masterpieces, with five million visitors a year craning their necks to admire High Renaissance art.

External restrictions are the biggest deterrents of creativity. We feel boxed by restrictions, when in fact, we must take the most of the limitations imposed on us and search for a way around restrictions. We’re constantly told to be more creative, to ‘think outside of the box’. How? Where does it come from?

Creativity is unstructured. It requires no following of rules or patterns. Ultimately, the process comes down to changing your perspective and seeing things differently than you currently do. Ask yourself:

Can you design a building in the middle of an ocean?
Can you tell a story in six words?
Can you paint a curved picture on a 40m high ceiling?

Or, will you dismiss the idea, because it’s practically impossible to do so?

Limitations can lead to original solutions. But, first, it requires mental liberation. One must be liberated from barriers in order to overcome the barriers. Creativity is the best response to limitations. Don’t think outside of the box, because there is no box, and so there are no limitations.

Anna Domanska
Anna Domanska is an Industry Leaders Magazine author possessing wide-range of knowledge for Business News. She is an avid reader and writer of Business and CEO Magazines and a rigorous follower of Business Leaders.
« Howard Schultz Steps Down As Starbucks CEO, COO Kevin Johnson To Replace Him
GoDaddy to Acquire Rival Host Europe Group for $1.7 Billion »
Leave a Comment
Close