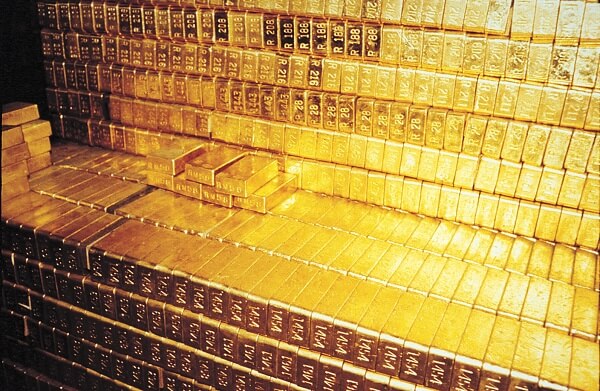 Central Banks are traditionally the largest holders of gold. Most Central banks are now diversifying their foreign exchange reserves with gold. In 2012 gold buying by central banks globally reached 534.6 metric tonnes. According to World Gold Council the global reserves rose to 31671.4 tonnes in March 2013. Here is a top ten list of the countries holding the most gold as reserve.

1. United States – Officially the United States has the largest gold holdings in the world with 8,133.5 tonnes, equivalent to 75.1 percent of its foreign reserves. It has around 3,000 tonnes in reserve.

2. Germany – The largest economy in the Eurozone’s  official gold holdings account for 3,391.3 tonnes, which are valued at about $125.01 billion, equivalent to 72.1 percent of its foreign reserves. Under CBGA 1 and 2 Germany sold gold for the purpose of minting commemorative gold coins. In the first year of CBGA 3 it sold approximately 6 tonnes and since September 2011 it has sold about 4.7 tonnes of gold. Of late there haven’t been any changes in Germany’s gold holding.

3. Italy – At number three the official gold holdings account for 2,451.8 tonnes which are worth approximately around $89.92 billion, equivalent to 72.2 percent of its foreign reserves. It sold no gold under CBGA 1 or 2 and also announced that it will not sell gold under the CBGA 3 too.

4. France – The French National Bank is home to the country’s gold holdings which have been reported at 2,435.4 tonnes, equivalent to 69.2 percent of its foreign reserves. Under CBGA 2 France sold 572 tonnes of gold. In 2004 France transferred about 17 tonnes of gold to the bank for International Settlements as part purchase of BIS shares. Under CBGA 3 there will be no sale of gold reserves.

5. China – The world’s most populous country has the world’s fifth largest gold reserve. China’s official gold holding account for 1,054.1 tonnes and the percent of foreign reserves in gold is 1.7 percent. The country still has around 1,900 tonnes in reserves. It has already mined a total of 249.7 tonnes in the second quarter of 2012 as against 355 tonnes in 2011, which reflects a 10 percent increase from the same period last year. It still holds a very small percent of China’s $3.2 trillion in foreign exchange reserves as compared with the international average of 10 percent.

6. Switzerland – In the sixth place Switzerland’s gold holdings account for 1,040.1 tonnes, equivalent to 10.0 percent of its foreign reserves. In 1997 the World Gold Council announced that a part of Switzerland’s gold reserves will be sold because they were no longer considered to be essential for monetary policy purposes. In May 2000 the country sold about 1,300 tonnes as it was considered to be surplus. 1,170 tonnes were sold under CBGA 1 and 130 tonnes were sold under CBGA 2.

7. Russia – Since 2006 Russia has been trying to build its own gold reserves in order to expand the Forex reserves. The country has already bought 57.6 tonnes to increase its reserves to 976.9 tonnes, equivalent to 9.6 percent of its foreign reserves. It added around 75 tonnes to its reserve holdings by purchasing domestically produced gold.

8. Japan – Managed by the Bank of Japan, it is the eighth largest gold owner in the world with official gold holdings of 765.2 tonnes, equivalent to 3.2 percent of its foreign reserves. In 1950 Japan’s gold reserves were just about 6 tonnes. The central Bank of Japan noticed the first serious jump in 1959, with purchases increasing by 169 tonnes. In the year 2011, Bank of Japan sold gold worth Y 20 trillion into the economy to augment investments after the tsunami and nuclear disaster.

9. Netherland – The Netherland Bank manages the Dutch national finances including the gold reserve, with official gold holdings of 612.5 tonnes, equivalent to 59.2 percent of its foreign reserves. In the year 1999 Netherland announced that it will be selling 300 tonnes of gold in the coming five years, but managed to sell only 235 tonnes. It said it would sell a total of 165 tonnes under CBGA 2.

10. India –The reserve Bank of India manages the gold reserve, with official holdings of 557.7 tonnes, equivalent to 9.6 percent of its foreign reserves. Since the gold prices plunged, shoppers are flocking to buy gold. The Indian government has been trying hard to stop people from buying gold as the gold imports may rise the country’s current account deficit. India had imported around 71 tonnes of gold in April 2012.