Colgate-owned ‘Black Person Toothpaste’ to get a makeover

The historically racist toothpaste has been sold in Southeast Asia for 90 years – ever since its founder fell in love with American minstrel performer, Al Jolson, who was notorious for his blackface performances.

Darlie is owned by Colgate and its joint venture partner Hawley & Hazel and sold widely across Southeast Asian countries where its brand and logo are not considered offensive. According to Euromonitor International, Darlie has a 45% market share in Taiwan, 28% in Malaysia, 21% in Singapore, and 17% in China. 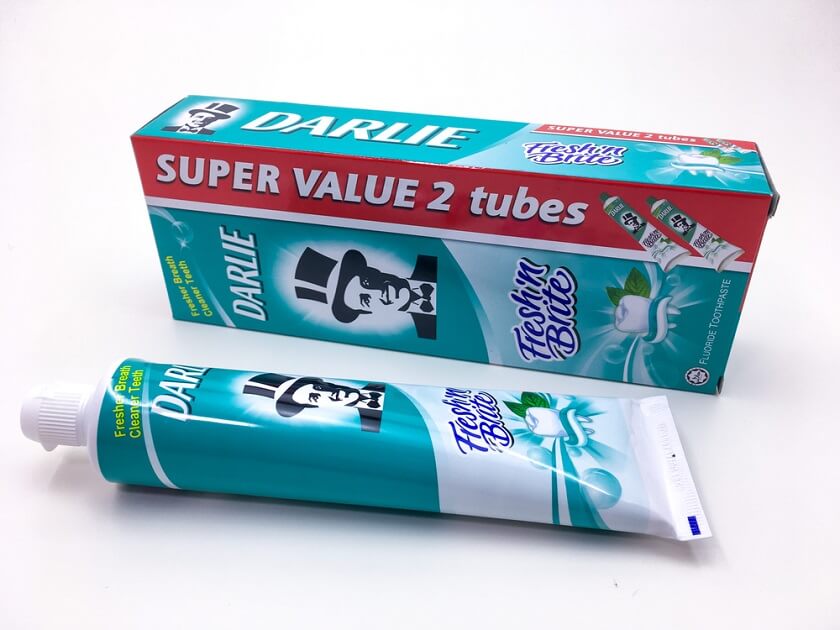 Colgate Chairman-CEO Noel Wallace noted with pride in May that Darlie has retaken the No. 1 slot in the Chinese toothpaste market last quarter.

Darky, or Darkie, is used as an insulting and contemptuous term for a person who has black or brown skin. The word was most often used by southern women and upper-class men who thought the commonly accepted word n*gger to describe a slave was pedestrian.

The historically racist toothpaste has been sold in Southeast Asia for 90 years – ever since its founder fell in love with American minstrel performer, Al Jolson, who was notorious for his blackface performances. Hawley & Hazel marketed Darkie, its lone product, as a parody of Jolson. The whiteness of his teeth not only became the brand’s selling point but also inspired its logo and advertising.

Colgate-Palmolive’s acquisition of Hawley & Hazel in 1985 was followed by a massive controversy in the U.S. After nearly five years of pressure, including the Congress Black Caucus warning Colgate that it planned to call for a boycott of the company did then-CEO Ruben Mark succumb by issuing an apology and replacing the English name of the toothpaste to “Darlie” in 1989. The branding cost the company millions of dollars but the racist connotations remain as it had become the brand’s unique selling point. In fact, the Chinese name of the toothpaste remained the same, and the product was still marketed as a “Black Person Toothpaste.” One Cantonese commercial announcing the change in 1990 noted that “Black Person Toothpaste is still a Black Person Toothpaste.”

Colgate-Palmolive is now working with its joint-venture partner Hawley & Hazel to make unspecified but substantial changes to the toothpaste’s racist brand name, logo and packaging.

The American consumer products company’s decision follows that of several other companies, which have taken decision to move away from racist branding in recent weeks. PepsiCo recently announced it would drop Aunt Jemima from the Quaker Oats pancake syrup brand, while Land O’ Lakes butter removed a Native American woman from its logo.

The Black Lives Matter campaign against racial injustice in America has sparked a reawakening in the corporate world, with many choosing to acknowledge their racist past and eliminating brands with racist connotations and branding altogether.

Anna Domanska
Anna Domanska is an Industry Leaders Magazine author possessing wide-range of knowledge for Business News. She is an avid reader and writer of Business and CEO Magazines and a rigorous follower of Business Leaders.
« Maintenance and Spare Parts for Aircraft May Take A $60 Billion Hit
2021 BMW M5 Debuts New Looks »
Leave a Comment
Close