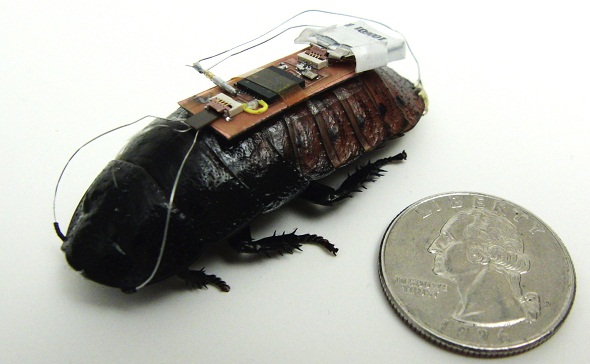 Researchers at North Carolina State University have developed technology that allows cyborg cockroaches, or biobots to capture sound through tiny microphones and discover the source of the sound. The technology is designed to assist emergency personnel in rescue efforts in cases of natural disasters and emergencies.

“In a collapsed building, sound is the best way to find survivors,” said Dr. Alper Bozkurt, an assistant professor of electrical and computer engineering at NC State and senior author of two papers on the work.

The research team has equipped the biobots with electronic backpacks that control the cockroach’s movements. Currently, the team has developed two sets of custom backpacks complete with microphones. The first type uses a single microphone that can capture relatively high-resolution sound from any direction that is then transmitted wirelessly back to first responders.

The second version of biobot is equipped with a range of three directional microphones to detect the direction of the sound. The research team has also developed algorithms that analyze the sounds picked up by microphone that can steer the biobot in the right direction, a method that was successful in laboratory testing. Other than detecting the sound’s location, the biobots will have to be able to differentiate between types of sounds.

Previously, a research team headed by Dr. Edgar Lobaton had shown that biobots could be used to map a disaster area. Funded by National Science Foundation CyberPhysical Systems Program, the eventual goal for Bozkurt and Lobaton is to consolidate their research efforts to both map disaster areas and pinpoint survivors. The researchers are already working with collaborator Dr. Mihail Sichitiu to build the next generation of biobot networking and localization technology.

Bozkurt’s team also recently developed technology that can be used as an “invisible fence” that will stop the biobots from straying too far from the disaster area. While this helps biobots stay in a defined area, it also makes them stay near light sources so that the miniaturized solar panels on biobot backpacks can be recharged.

This technology was showcased at the IEEE Sensors 2014 conference in Valencia, Spain that took place from November 2-5.

In a recent interview, he acknowledged that toys and players are continuously evolving. Keeping this in mind, the company wants to develop its wares both in the physical and digita
20 seconds ago