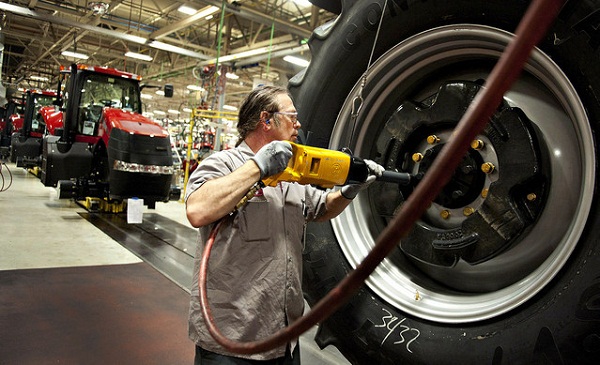 CNH Global NV approved and supported the $ 1.5 billion takeover offer by Fiat Industrial SpA. The acceptance of the bid means that Fiat CEO Sergio Marchionne’s plans to create the world’s third-largest capital goods group by sales are coming true. The new merged entity is expected to shift its focus to the U.S market from European one.

Fiat Industrial’s takeover offer for CNH Global NV was proposed as the Italy-based tractor and construction maker attempts to reorganize the group structure mainly to improve its access to the capital markets. Fiat Industrial SpA has been already an owner of approximately 88 percent shares in CNH Global NV. According to Sergio Marchionne’s plans, the main listing of the new merged equity is to be moved to New York from Milan. The entity is to have the primary listing in New York and the secondary listing in Milan.

The takeover offer was improved by Fiat Industrial SpA, valuing CNH Global NV at roughly 26 percent more than the initial one. The offer was raised on the 19th of November after CNH Global NV had rejected the original one. The bid for CNH Global NV includes a $288 cash dividend, or $10 per share, compared to the initial bid of approximately 3.83 shares of stock in the new merged entity for every share in CNH Global NV. The special committee of the Amsterdam-incorporated group underlined in its statement that it “viewed favorably” the improved takeover offer made by Fiat Industrial SpA. The committee concluded in the statement: “The special committee has directed its advisers to work with Fiat Industrial to negotiate definitive documentation.” A final merger agreement is expected to be signed by the 25th of November.

According to analysts, the deal is reasonable. Experts underline that the merger is expected to reduce costs by as much as €150m. In addition, Iveco truck unit of  Fiat Industrial SpA has announced that it is to shut down five factories located in Europe by the end of 2012 as it transfers its production out of the region which struggles amid financial crisis.

New giant to be born

Sergio Marchionne, chief executive officer at Fiat Industrial SpA, has been attempting to create the world’s third-largest capital goods company. These days his plan is to come true. The new merged entity will not, however, use Fiat in its name. The new giant, which is to be born, will have a wide range of products from Iveco trucks to FPT ship engines. The reorganization of the company is also caused by the aforementioned debt crisis in Europe.

In addition, the merged entity is expected to benefit from the higher valuation investors assign to CNH Global NV. It is worth reminding that Richard Tobin, chief executive officer at CNH Global NV, was nominated as chief operating officer at Fiat Industrial SpA. According to sources familiar with the matter, he will be responsible for the integration of two companies which is expected to end before the end of 2012.

Fiat Industrial SpA reposes hope in the merged entity as its top officials are convinced that the new company will be able to better compete with rivals including Caterpillar and John Deere.