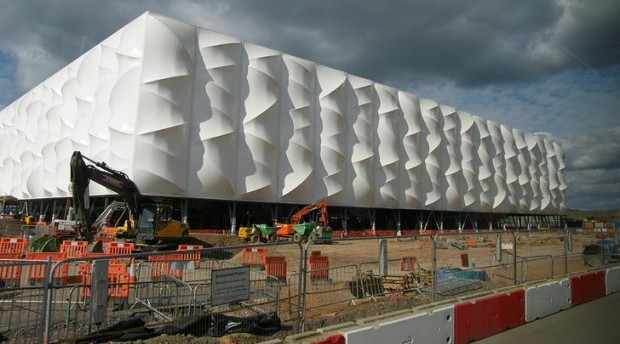 The reusable-recyclable Basketball stadium of the 2012 Olympics, unveiled last week, is the fourth Olympic Park venues completed a year in advance of the Olympics, and is being dubbed as one of the quickest venues to complete construction, according to the Olympic Delivery Authority (ODA)

The London 2012 Olympics Basketball Arena is one of the largest temporary venues ever used for an Olympic and Paralympic Games, according to the official 2012 London Olympics website.

Designed jointly by Sinclair Knight Merz, Wilkinson Eyre and KSS, this recyclable, reusable 2012 Olympics Basketball Arena, located in the Olympic Park, East London will be dismantled after the Games to be reused elsewhere.

With the master-plan for the detachable 2012 Olympics Basketball Arena being executed in October 2009, the recyclable venue has been completed on perfect budget and within estimated time.

Dennis Hone, Chief Executive of the Olympic Delivery explained the motive behind the recyclable-reusable arena in a media release, saying that, “Completing construction on the Basketball Arena delivers another striking Games-time venue for the Olympic Park and an innovative structure that can be re-used elsewhere after 2012. As the fourth Olympic Park venue completed and one of the quickest to finish construction, the Basketball Arena is another milestone for the Olympic Park ‘Big Build’ and a tribute to the companies from across the UK involved in its delivery.”

Designed by architects Sinclair Knight Merz along with Wilkinson Eyre and KSS, the reusable 2012 Olympics Basketball Arena has been carefully designed and built in a manner which allows it to be dismantled and further reused or recycled.

The mammoth Arena, which provides seating for 12,000 people, is 35 meters high and 115 meters long, and has been built using a 1,000-tonne steel frame which is covered in 20,000sqm of white recyclable, environment-friendly PVC membrane.

With every component used in this assemble aiding the dismantla-bility and collapsibility of the stadium, the 2012 Olympics Basketball Arena also boasts a creative lighting design on the exterior white recyclable canvas, enhancing the green, temporary nature of the building.

Reports say that once the games are over, the arena will be dismantled and handed over to the next country hosting the Olympics in 2016.

With Boris Johnson, the Mayor of London, promising around the end of May that London will see hundreds of green projects come to fruition in time for the opening ceremony on 27 July, the recyclable-reusable Basketball Arena becomes only the beginning.

Describing his vision about the statement London will make at the 2012 Olympics, Mayor Johnson said, “I want London to look its very best in 2012 as the eyes of the world are upon us. The games are a unique opportunity for London to secure its position for another generation as the best big city in the world.”

With a series of major new initiatives being implemented across the city, London’s green transformation includes the most famous buildings in this world capital being re-fitted with low-energy lights, ensuring homes in the Olympic boroughs are as eco-friendly as possible, and implementing a fleet of electric cars that would be used by officials and athletes for travel during the games.