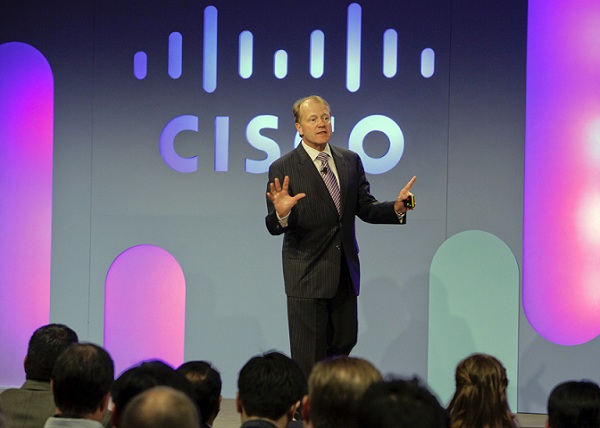 Cisco Systems Inc., the world’s largest maker of computer-networking equipment, has published its quarterly profit and sales. The company noted a sales increase of 4 percent as well as a gain in profit for its fourth-quarterly results. Even though Cisco was affected by the economic turmoil as other companies all over the world, its latest financial results show that company is strong enough to increase its dividend. The downsizing of workforce and price reduction resulted in the current strong economic position of Cisco.

Cisco’s revenue hit $11.7 billion for the fourth quarter that ended on 12th of  July; it was almost 4 percent up from the previous year. Cisco plans to reach an annual growth of 5 percent to 7 percent. The company’s net income increased 56 percent to $1.9 billion from the year-earlier quarter, compared with analysts’ anticipation for $11.6 billion.

Cisco’s profit excluding some costs was 47 cents per share in the period. Although Cisco’s financial results published on Wednesday missed Wall Street analysts’ predictions, the company decided to raise its dividend by 75 percent due to satisfying figures.

However Cisco noted the increase in sales, Chairman and CEO John Chambers remarked that Cisco’s unit order for Europe, the Middle East and Africa dropped 6 percent in the fourth quarter all because of the continuing economic crisis. At the conference there was also underlined that the situation regarding European service providers would not improve in the second half of the year.  At the same time John Chambers said that the company had seen some signs of the growth in the U.S., though it might not be a portent of an ongoing trend.

Cisco’s revenue from its core business of switching and routing was comparatively flat and an 8 percent drop was noted by its collaboration business. Among those Cisco’s businesses which noted an increase was inter alia the Unified Computing System server platform with a 58 percent gain, and wireless with a 22 percent gain of revenue.

However it should be noted that those strong figures are results of some painful measures introduced by the company. John Chambers, the CEO at Cisco, has downsized approximately 7,800 jobs, closed some Cisco’s businesses and reduced prices of Cisco’s products all that to stay on track and win with Juniper Networks Inc. and Hewlett-Packard Co.

After Cisco’s financial results were published on Wednesday shares rose 5 percent in the late trading. A single share increased 1.1 percent to $17.35 on Wednesday in New York. A slight gain in the price of shares means that investors are convinced that the company may start accelerating its growth. However Erik Suppiger, an analyst with JMP Securities LLC in San Francisco, said: “But they (Cisco) are effectively keeping their profitability intact and taking some steps to return earnings back to shareholders.”

Cisco determined to note a growth

Cisco has not finished its reorganization yet. Last year some extremely hard and painful decisions had to be made; and thousands of people lost their jobs. But Cisco is aware that without any following steps concerning an adjustment of its organization and product lines, the company will be doomed. That is why Cisco decided to give up on Cius tablet and announced a downsizing of another 1,300 positions. Cisco has to take difficult steps, otherwise it will not survive. Basically up to date Cisco has been facing numerous challenges which must be resolved in the near future.

Anna Domanska
Anna Domanska is an Industry Leaders Magazine author possessing wide-range of knowledge for Business News. She is an avid reader and writer of Business and CEO Magazines and a rigorous follower of Business Leaders.
« Verizon Wireless spectrum deal with Comcast Corp. approved.
VanceInfo Merges with Rival HiSoft to Create Largest Outsourcing Leader in China »
Leave a Comment
Close