The most prosperous county in the nation and the home to Silicon Valley, Santa Clara stands third on the chronic homelessness rating scale across the US. Cisco has pledged to donate $50 million over a time period of five years to Destination:Home, a community-specific organization to eliminate homelessness in Santa Clara County. Out of the committed donation, $20 million has already been credited, via the Cisco Fund.

Santa Clara County is the largest of the nine Bay Area counties and constituents one-fourth of the total Bay Area population. According to 2017 homeless census and survey, with a sharp rise of 13 percent in the homeless population compared to 2015, Santa Clara County has 7,400 individuals including children who have experienced homelessness and 2,000 people who are recognized chronically homeless. San Francisco and Alameda County have performed even worse in the same survey.

Lead by Chuck Robbins, Cisco CEO, the support to the #endhomelessness initiative is annexed to their promise of positively touching 1 billion lives globally by 2025. Based in Santa Clara County since 30 years, Cisco found that homelessness has become a critical issue for the local community. Robbins realized that it is important for companies like Cisco to harness the combined influence of social and private sector while enduring the cause. This will directly lead to a reduction in the government’s overall cost structure and allocate public resources for better use. 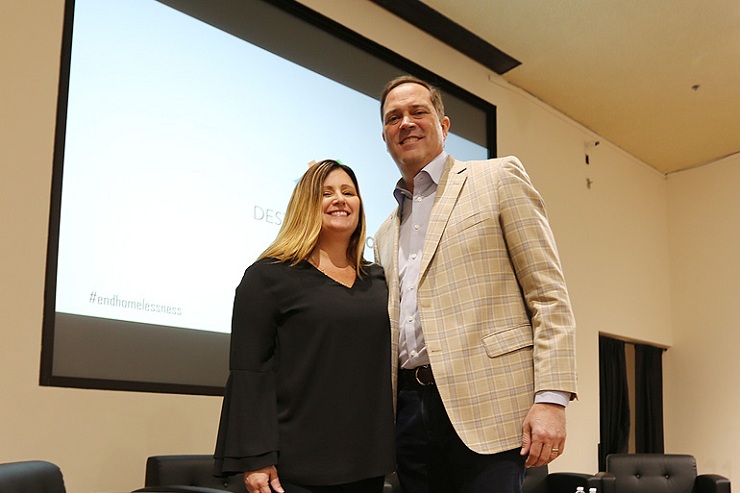 Jennifer Loving and Chuck Robbins. Used with the permission of http://thenetwork.cisco.com/.

Over 3 billion of the county community services were utilized by 104,206 homeless residents between 2007 and 2012. Through a comprehensive study done by Destination:Home (2015) titled Home Not Found, it was analyzed that approximately $520 million is the annual cost of homelessness in Santa Clara County. The largest share of the homeless residents’ public cost is labeled under health care services which sized 53 percent. It is followed by expenses involved in justice system form homeless which constituent 34 percent. The remaining 13 percent of the public money was actually converting into social service.

Jennifer Loving, executive director of Destination:Home, is delighted to have tech-titan Cisco on their platform. Citing reasons such as economic dislocation, reduced social safety nets, failed housing policy, mass incarceration, family instability, and economic instability, Loving believes that the #endhomelessness initiative has suffered a lack of attention for a long time. Now it will gain a much-needed momentum with Cisco’s support.

Robbins mentions its $50 million contributions as a smart and long-term investment towards eradicating the solvable problem of homelessness from the community. Firming his faith, he stated that Destination:Home, has allocated homes for more than 5,000 people in the past three years, including 1000 veterans. Out of those permanently resettled, 94 percent still stay at their place of residence. The donated amount will aid Destination:Home project in terms of designing social service intervention frameworks, buying additional land to build housing, increasing data collection and analyzing potential, and investing on disruptive technological solutions to housing homelessness people.