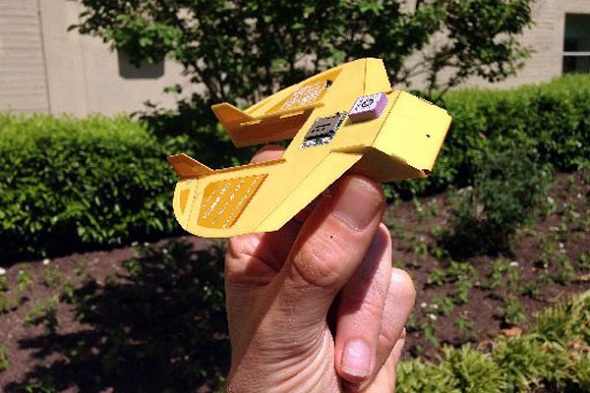 The mini drone can fly at about 46 miles (74 kilometers) per hour and has no engine or propulsion system to speak of.

Researchers in the US Army have developed a new fierce and efficient weapon suited for war. A new drone that is smaller than a human hand is being developed to be used in war plus civil missions.

The Covert Autonomous Disposable Aircraft, also known as Cicada looks similar to a toy-drone. These miniature drones can be easily dropped from any air vehicle, such as helicopters, airplanes, air balloons or even by the larger drones. Once dropped, Cicada can glide like a bird towards the specified location. Hence the drone has also earned another nickname, robotic carrier pigeons.

These drones are said to be highly effective at carrying out tasks. The US military plans to use them on essential missions, like spying on the enemy troops and locating submarines beneath the water. The minuscule size of the drones will make them very furtive, and army officials believe that most of them will go undetected by the opponent.

Developers say they were inspired in their work by the iconic Great War pigeons. Aaron Kahn, a flight controls engineer, from the Naval Research Laboratory said that the idea was to build UAVs (unmanned aerial vehicles) that have similar profile. And when several drones are dropped at once, it looks like a flock of birds and are practically impossible to detect at long distances with the naked eye nor with the help of radars, he added.

The mini drone can fly at about 46 miles (74 kilometers) per hour and has no engine or propulsion system to speak of. They depend only on gliding to reach their designated location once they have been dropped off. It bears a resemblance to paper airplane with a circuit board and is devised to glide to programmed GPS coordinates after being dropped from an air vehicle.

In case the mini drone is spotted by the enemy troops, researchers believe the Cicada drone will still able to carry out a mission in an obscure battlefield because of their sheer numbers. It is designed to be cheaper, smaller simpler than any other robotic aircraft. The prototype cost just about $1,000, and their designers believe that once they begin large scale production, the Cicadas could come down to as little as $250 per piece.

And in spite of their toy-like appearance, the Cicada drones are not at all fragile. During tests, the researchers observed that the drones performed surprisingly well even after having hit the asphalt, flying through trees or getting filled with sand.

What’s remarkable here is that every government agency has expressed an interest in the Cicada program, including the military and intelligence agencies.