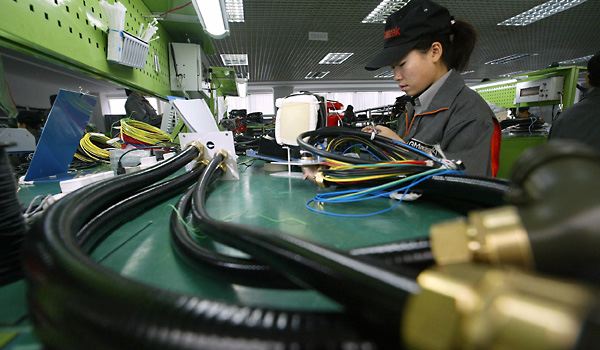 On the 1st of March, the National Bureau of Statistics released its data showing that the China’s manufacturing sector slowed down in February. The weaker-than-expected expansion suggests that after all the China’s economic recovery might be losing its momentum. Data showed that the important indicator dropped to 50.1 in February from 50.4 in January.

The National Bureau of Statistics and China Federation of Logistics and Purchasing published its survey that indicated that the China’s manufacturing PMI slumped to 50.1 in February, compared to 50.4 noted a month earlier. The expansion of the sector’s activity was the slowest in five months. What is more, the findings of the official survey missed the preliminary reading conducted by HSBC Holdings Plc and Markit Economics which estimated that the China’s manufacturing PMI reached 50.4 in February.

But still the China’s economy is expanding. It has started accelerating since the third quarter of the year when the economy just hit the bottom. Yet, the steps taken by the government put the economy back on track of growth. China Federation of Logistics and Purchasing highlighted in a statement that after all the manufacturing sector was stabilizing. Still however, there are many concerns over a rebound in inflation, investment, etc. All these concerns have affected the reading of the PMI. Therefore analysts note that the China’s economic recovery is still much vulnerable and much dependent on the government’s monetary policy.

Some experts claim that findings of surveys on economic data in January and February were distorted by the Lunar New Year Holiday. Also government officials underlined in a statement that the China’s manufacturing PMI’s drop was absolutely normal taking into consideration the week-long holiday; they also stated that the figure indicated “economic growth will move from rebounding to stabilizing.”

However some analysts are strongly convinced that the event has a small effect on the reading as the indicator is more about sentiment that actual and real activity. They also note that the National Bureau of Statistics adjust the manufacturing indicator to seasonality, thereby making the final results be more adequate and exact.

The findings of the survey, in addition, indicate that the China’s new government would face pretty strong headwinds, especially when we take into account that small and mid-sized manufactures saw contractions in February. The China’s manufacturing PMI at 50.1 shows that the economic recovery of the worlds’ second largest economy is weak.

The new leadership will have to come to grips with complex international situation, the European debt-crisis, domestic reforms. Indeed, Xi Jinping and Li Keqiang, who are to begin their roles as president and premier respectively in the first week of March, will face many challenges as they will aim to boost the China’s economy.

Li Keqiang has already announced that he is a big fan of urbanization and that he will opt to boost growth of urban areas. This goal is expected to lead to new investments in infrastructure and housing which in result will wake up the sluggish economy of China and sustain growth as well. Experts, however, are convinced that the economic recovery of China will be rather weak, underlining that growth is much dependent on investment.

Anna Domanska
Anna Domanska is an Industry Leaders Magazine author possessing wide-range of knowledge for Business News. She is an avid reader and writer of Business and CEO Magazines and a rigorous follower of Business Leaders.
« Chris Lynch named new CFO at Rio Tinto
The Top Five Most Luxurious Trains in The World »
Leave a Comment
Close