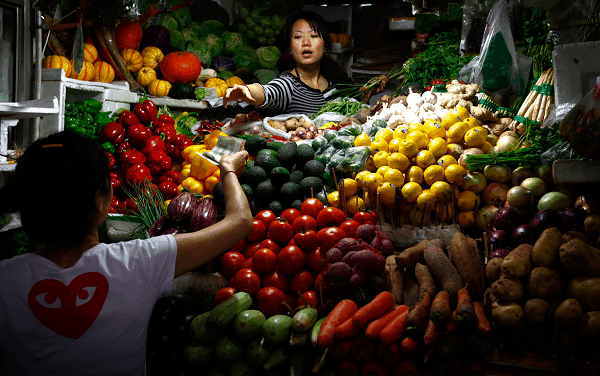 Official data showed on the 9th of November that China’s annual consumer inflation slowed to a 33-month low on food cost in the month of October thus giving the government scope to introduce new easing measures if needed. The policy of the China’s government has succeeded in supporting the growth of the world’s second-biggest economy.

On the 9th of November, the National Bureau of Statistics reported data on the China’s consumer-price index. According to data, consumer price grew only 1.7 percent in October from a year earlier, down from a growth of roughly 1.9 percent in September. China’s inflation in the month of October was below the average analysts’ projection of approximately 1.9 percent.

The producer price index slumped as much as 2.8 percent from last year; however it eased from a decline of roughly 3.6 in September. Analysts expected a decrease of 2.7 percent.

According to Societe Generale, the results indicate that the China’s CPI is about to jump to the 2 percent level in the upcoming months despite the fact the food-price growth slowed down. As it was underlined by Societe Generale, other elements of the China’s CPI saw inflation increase. Yao Wei, an analyst with Societe Generale, noted: “It seems that the underlying inflation pressure wasn’t as benign as the headline suggested. Entering November, food inflation started to turn back up. Together with the base effect and improving domestic demand, we expect CPI to rise notably towards the year-end.” Some analysts believe that despite the fact that the government is determined to maintain inflation under 4 percent for the full year, November and December are likely to see increases in consumer prices as the cold weather usually lift prices of vegetables and meat as well.

Data on China’s consumer-price index is refreshing as the world’s second-biggest economy climbed approximately 7.4 percent in the quarter ended September, which has been the country’s weakest performance in over three years. However analysts believe that recent results of manufacturing, trade as well as industrial output indicate that the worst is just behind Chinese economy and that the economic slowdown in China may just be over soon.

Released data on China’s inflation shows that there is room for the Chinese central bank to continue both monetary and fiscal policies in order to strengthen the first signs of economic recovery. These new figures should easily quell any existing concern over inflationary pressure.

The low inflation in China is without a doubt good news for the government as it means that key decision makers have room to maintain the introduced moderate monetary and fiscal stimulus measures. Therefore the easing policy is expected to be maintained for the ongoing quarter to support economic recovery. For example, benchmark interest rates have been reduced twice since the beginning of 2012.  The government of China has decided to cut reserve ratios three time since the end of 2011.

Even after the change in the leadership, the financial program of the People’s Republic of China is expected not to be changed. Hu Jintao, the outgoing chief of the Communist Party, underlined in his speech that the country would maintain policies responsible for sustainable economic development aimed at doubling China’s GDP to 2020.

Anna Domanska
Anna Domanska is an Industry Leaders Magazine author possessing wide-range of knowledge for Business News. She is an avid reader and writer of Business and CEO Magazines and a rigorous follower of Business Leaders.
« Shares of Asia slump on concerns over US fiscal cliff
Chief of BBC Quits over Failures Regarding Shoddy Journalism »
Leave a Comment
Close