Last time Microsoft checked China, it was one of its biggest software buyers in the world. Except well, what comes as a shocker in the world of technology is that China has turned to ruling out Windows 8 on government computers striking back against Microsoft which has been facing severe sales woes from the country. 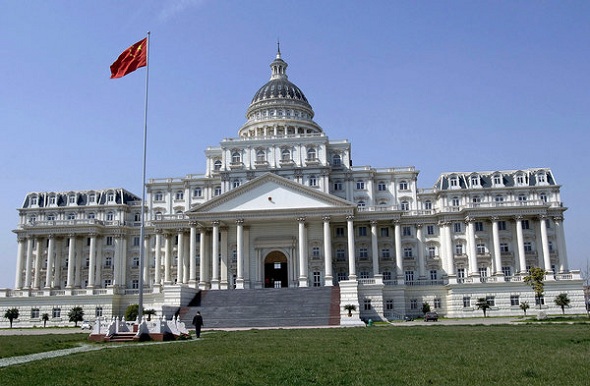 The newly constructed government office building in Anhui Province in 2007

China has announced today that it will shun use of Microsoft 8 Operating System in an effort to minimize security risks as the Software giant ended support to Windows XP. All desktops, laptops, and tablet PCs purchased by the government must have any operating systems other than Windows 8, as a part of notice that covered use of energy-saving products. No explanations were provided in the brief statement issued by the Central Government Procurement Centre. Nor any statements were issued explaining how it would affect energy-saving efforts.

“Security problems could arise because of a lack of technical support after Microsoft stopped providing services, making computers with XP vulnerable to hackers,” said Yan Xiaohong, National Copyright Administration Deputy Director said in a statement. “Windows 8 is fairly expensive and will increase government procurement costs,” he said, adding that authorities are currently negotiating with Microsoft over the issue.

According to the official Xinhua news agency, the ban is imposed to make computer security certain after Microsoft ended support on Windows XP OS, which was widely used in China. Microsoft, which wants users to switch to Windows 8 from the 13-year-old Windows XP operating system in April, might face significant sales impact with the issued ban in one of its biggest market of computer software in the world. The Chinese Government is the biggest buyer of computer software in China.

China has always been a bothersome geography for Microsoft. Former CEO Steve Ballmer had reportedly told employees in 2011, that Microsoft earned less revenue China compared to the Netherlands even when both the countries computer sales matched, in citing piracy troubles.

According to data firm Canalys “China’s decision to ban Windows 8 from public procurement hampers Microsoft’s push of the OS to replace XP, which makes up 50 percent of China’s desktop market.”

Some believe the move comes as a part of strike back against the US Cybercrime charges on five Chinese military officers for alleged cyber-espionage of American entities in order to benefit Chinese state-owned companies. The row has further escalated to China accusing US of ‘hypocrisy’.

Anna Domanska
Anna Domanska is an Industry Leaders Magazine author possessing wide-range of knowledge for Business News. She is an avid reader and writer of Business and CEO Magazines and a rigorous follower of Business Leaders.
« Youtube in Possible Acquisition Talks of Twitch for $ 1 Billion
Dropbox Acquires 3D Photo Stitching Start-up Bubbli… Is Dropbox slowly turning into a slaughterhouse of apps? »
Leave a Comment
Close

Most Japanese major companies, which at one time were leaders in consumer electronics, are struggling to find their feet in a world that has moved to digital software. Electronics
9 hours ago