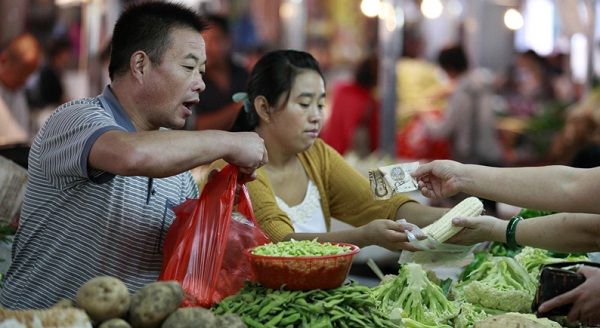 Even though China saw inflation speed up vaguely in April, it remained subdued, thereby making it possible for the government to introduce measures aimed at fostering the economy. Concerns have been recently raised over the strength of the economic recovery and the state of the world’s second economy.

On the 9th of May, the National Bureau of Statistics released its data on China’s consumer inflation, indicating that the index grew around 2.4 percent in April on a year-on-year basis. Interestingly, China recorded a 2.1 percent pace of the March’s consumer inflation. The fact is that the April’s consumer price index was far below the official target of 3.5 for 2013 which is a positive sign for the government, yet it topped analysts’ estimates ranging from 2.2 percent to 2.3 percent.

Surprisingly or not, official data showed that the producer price index slumped approximately 2.6 percent in April on a year-on-year basis, compared to a decrease of 1.9 percent recorded in March.  Analysts note that this deflation is a simple echo of the first-quarter slowdown in manufacturing output.

As for food prices, China saw them climb astonishing 4 percent in April on a year-on-year basis, compared to growth of roughly 2.7 percent recorded a month earlier. The National Bureau of Statistics underlined that a jump in fresh-vegetable prices was the main driver of the April’s increase of the food price index. Yu Qiumei, a senior statistician at the National Bureau of Statistics, accentuated that adverse weather conditions substantially reduced existing supplies, concurrently pushing food prices up. Without a doubt, rising food prices have added to concerns of the new government which however stated that it would try to stabilize them in the near future.

Most analysts are convinced that inflation will not increase significantly in 2013 and will remain more or less mild.

China has been slowly recovering from the slowdown since 2002 when the global financial crisis began. But the fact is that latest figures showed us the mixed picture of the China’s economic recovery as the world’s second economy saw its growth surprisingly dropped to 7.7 percent in the first quarter, compared to 7.9 percent recorded in the three-months period ended December 2012. Analysts note strongly that today’s economy of the Asian dragon is fueled by both government investment and bank lending as the authorities want the economy to be less dependent on foreign demand.

Taking into account the current situation, experts are convinced that the central bank will not stoop to further easing measures, but extra investment projects might be used to foster weak domestic demand.

The fact is that the new government is less concerned about the short-term weakness and worse statistical results, but it indeed much concentrates on the structural problems as the authorities aim to restructure the China’s economy. What is important to the new leadership is to add jobs and strengthen the economic recovery as these steps would help the authorities maintain social stability.

Anna Domanska
Anna Domanska is an Industry Leaders Magazine author possessing wide-range of knowledge for Business News. She is an avid reader and writer of Business and CEO Magazines and a rigorous follower of Business Leaders.
« IMF criticizes Osbornomics for “lost decade of growth”
Annan group says Congo lost $1.4bn on sales of mine sales »
Leave a Comment
Close