Silicon Valley startup Carbon3D has developed a new 3D printer that is set to revolutionize the industry. The company’s CLIP (Continuous Liquid Interface Production) technology uses a photosensitive resin that reacts to UV light and oxygen that could possibly help transform the manufacturing sector by improving production quality and expediting the printing process by up to 100 times.

With the CLIP technology, the 3D objects appear to magically emerge from a pool of liquid as a machine draws them upwards. Carbon3D made its announcement on the main stage of the TED2015 Truth or Dare big-ideas conference in Vancouver, Canada.

In recent years, three-dimensional printing has made major progress and has been used for everything from printing eatables to letting NASA to digitally transmit hand tools to astronauts in orbit around the earth. But, so far the technology has mainly been applied to basic prototyping, rather than full-scale manufacturing. 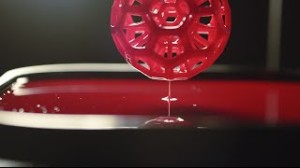 3D printing involves the use of jets to print an object one layer at a time from a stockpile of raw materials.

Normally, 3D printing involves the use of jets to print an object one layer at a time from a stockpile of raw materials. This results in 3D printing parts taking many hours or even days to produce and can be mechanically weak due to their shale-like layers. Additionally, the layer-by-layer method used in conventional 3D printing can generate objects with mechanical properties that differ significantly depending on the direction in which each layer was printed.

In contrast, the CLIP printing technique uses oxygen and lasers in a slow process that allows the photosensitive resin to cure. Using this revolutionary method, machines are able to print in speeds 25 to 100 times faster than conventional 3D printing, Carbon3D said. Since objects created using the CLIP technique are not printed one layer at a time, their mechanical properties are stronger than other 3D-printed objects.

Instead of printing one layer at a time, the CLIP technique grows objects out of a resin pool by controlling the material’s exposure to ultraviolet light and oxygen. UV light causes the molecules in the resin bath to go through photo polymerization, a process that induces single molecules to form more complex chains. On the other hand, exposure to oxygen impedes polymerization. Manipulating the resin’s exposure to both enables the printer to ascertain how an object takes shape.

Founded in 2013, Carbon3D recently announced a Series B round of financing led by Silver Lake Kraftwerk, alongside Northgate Capital and Sequoia Capital, raising a total of $41 million to commercialize the technology.

Christy Gren
Christy Gren is an Industry Specialist Reporter at Industry Leaders Magazine she enjoys writing about Unicorns, Silicon Valley, Startups, Business Leaders and Innovators. Her articles provide an insight about the Power Players in the field of Technology, Auto, Manufacturing, and F&B.
« Uber teams up with China’s BYD for electric car testing
Yahoo decides to shut operations in China, lays off hundreds »
Leave a Comment
Close