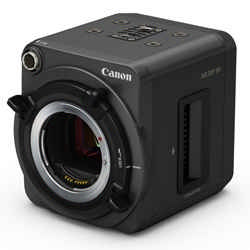 Taking full colour photos or shooting videos in low light can be very tricky and frustrating no matter how good the camera is. Adequate arrangements will have to be made for lighting to ensure that the video comes out just the way one likes it. However, Canon, the giant multinational corporation has unveiled a new camera that is capable of something entirely refreshing and could completely change how we take photos and videos in the dark.

The new multi-purpose camera is called the ME20F-SH and what makes this camera so unique is the model is able to shoot up to 4,000,000 ISO. It can see things in the dark that the human eye can’t, and captures it all with HD color photo and video.

This is also because of the enormous size of the photo-sites/pixels on the sensor, measuring at 19μm – or over five times larger than the photo-sites in other top-flight cameras.

ISO is a photography term that generally refers to how the camera handles light in its surroundings. The higher ISO the picture is taken at, the more can be captured in a low-light situation.

And those wanting to shoot 4K video will be disappointed, as the camera is touting a 2MP resolution. However, the camera is still capable of shooting full HD videos at up to 60 frames per second.

In the press release Canon said that the specialized camera is made for industrial uses and could potentially be used for night time surveillance, cinematic production, reality television and nature/wildlife documentaries.

According to Canon, the camera will go on sale in December 2015, but it won’t come cheap. The ME20F-SH is expected to retail for a whopping $US 30,000 which will put it out of reach for most consumers.

Canon first showed off the technology behind the camera a couple of years ago, making for interesting viewing even today. Basically, this new camera is a prodigious feat that will allow photographers and videographers explore dark spaces in a way that was never possible before.