California Desert Dreaming: Boom, much more than just a mirage 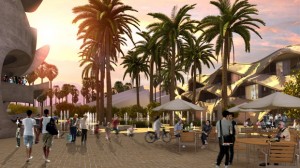 A community for gay retirees in the Californian desert, Boom is about “inclusion, not seclusion; … living, not retiring”.

A $250 million project being financed by Los Angeles-based developer Boom Communities,Inc, the designs are being formulated by architect Matthias Hollwich of Hollwich Kushner in conjunction with ten architecture firms from across New York, Europe and California. 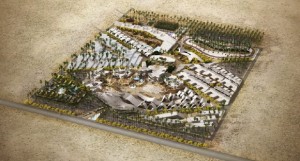 A planned multi-generational, pedestrian-oriented, culture-driven community to be built on 100+ acres in Rancho Mirage, the Boom project has been planned over two phases: phase 1 will include 300 residences in eight neighborhoods, an entertainment complex, a boutique hotel, a gym, and “state-of-the-art wellness facilities” in phase one, while phase two will add more residences.

One of the primary principles, as stated by architect Hollwich, being  to “ensure that we have a variety of sizes in all price ranges to provide accessibility to all ages – young and old, single and married and families with young children”, the 300 residences of Phase 1 include condos and single-family residences ranging from one bedroom to four bedrooms.

As for the public and commercial buildings, the two boutique hotels have been designed by Sadar + Vuga and Joel Sanders Architect, an indoor-outdoor cafe by Rudin Donner, a clubhouse, gym and spa by J. Mayer H. and a playground and “Healing Fun House” By Arakawa + Gins.

Landscape design for the project has been done by Surfacedesign, Inc., while Diller Scofidio + Renfro have designed the entertainment complex, which includes a rooftop mist disco and market.

More than anything else, Boom aspires to embrace difference. And provide an environment where a diverse, multi-generational, socially-progressive community can thrive.

While BOOM takes great pride in its architectural achievement, it is about more than new design. BOOM is also about lifestyle and a sense of community.

The demands of the gay community are more ambitious than traditional retirees. Gay Americans have a history of pioneering new ways of living and with BOOM, they want a community that will be open to everyone – young and old, gay and straight.

Further, residents who live at BOOM believe equally in giving back to the community. As a very integral part of living at Boom, residents here will have the opportunity to be active and involved in the many social and sports activities the community offers, as well as BOOM’s mentoring programs for the Desert communities. BOOM is forming a Private Foundation to fulfill these goals and its leadership committees will encourage residents to be as involved as they want to be in giving back to the community.

In information recently released, Matthew Hoffman of Hollwich Kushner indicated that while the group has met with community officials in Rancho Mirage, it hasn’t yet started in on the approvals process.

Even so, publicity materials say the project will break ground in late 2012 and finish up in late 2014.