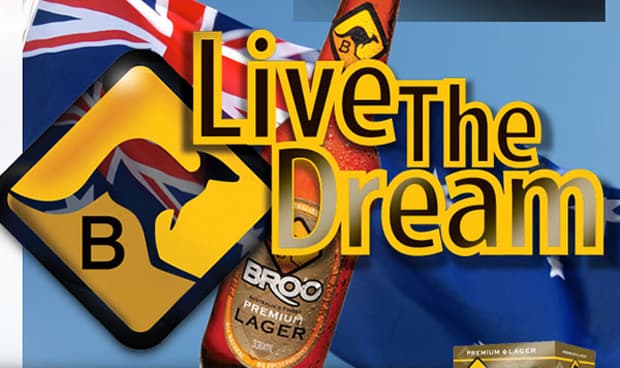 Typical of the down-under love you say ?

Two well-known facts: Aussies LOVE their beer. And they love everything Australian.

So drink to this: A new Aussie beer company, Broo, owned by Kent Grogan, has given away shares with every slab of the beer purchased in order to keep it 100% Australian owned.

According to reports, Kent Grogan went against all his lawyers’ advice, giving up 10 of his company’s shares to anyone who bought a carton of Broo beer starting Australia Day, January 26th 2011, anding 28th February 2011.

That’s called taking the spirit of “giving beer ownership back into the hands of Australians” to a whole new level !

With Broo’s “Live the Dream” promotion allowing buyers to own 10 shares per case, (up to a maximum of 500), some might think that this might end up being just monopoly money.

But with Grogan’s focus of keeping the brewery 100% Australian-owned, you can take comfort in the fact that this is not the case; that in fact, you’re helping your stock rise every time you throw another case of Broo into your shopping cart.

“These are full voting rights shares, they are exactly the same as the shares held by the founder, Kent Grogan.” The company said in a statement.

“It’s every bloke’s dream to own a beer company. I’m living the dream and now so can everybody else,”  Kent, father-of-three and one-time-dishwasher-turned-miner-turned-entrepreneur who decided to start his own beer company and change the national beerscape forever said in a statement to Microbrewing.

“And I want to take this big company on, but I can’t do it without the support of the Australian public. So I’m giving away 10 per cent of my company to beer drinkers. Buy one box and you’ll get one share. It’s as simple as that.” He said about the “Live the Dream” promotion.

“Who knows? Those shares could be worth a bloody fortune one day, people have nothing to lose except the cost of a box of beer,” he said.

“As a proud Australian who loves a beer, it leaves a bad taste in your mouth to realise some of the most popular ‘Australian’ brews aren’t really Australian at all,” he said. “Brands like Tooheys, Hahn, XXXX, James Boag’s, Swan, West End and Emu all belong to Lion Nathan, which is owned lock, stock and barrel by Kirin Holdings in Japan.

“It’s not just our beer that’s gone. Other great Australian brands like Uncle Tobys, Dairy Farmers, Arnott’s, Cottee’s and, of course, even Vegemite are now foreign owned. I owe it to my children to do something – in fact we all owe it to our children – to show a bit of national pride and eat and drink smarter than that. Besides all that, BROO’s just a bloody good beer!”

We love the spirit Grogan.

And of course, in tune with the 100% Aussie-owned philosophy, we expect the beer to look, talk and walk like a true Australian.

With an Australian road sign on a stubby of beer, do we really expect this company to be subtle about its philosophy and its product ?

So a description of the beer in Broo’s own words “She comes in at 4.6% Alcohol, and out of a 330ml brown stubby. Why a brown stubby? Because as any brewer will tell you, beer needs to be kept and drunk from a brown bottle. Keeps the light out, and the beer better. And the 330ml bottle…well you fit more into an esky.”

“We treat our beer like beer, it’s what beer was before all the tossers tried to treat it like wine.”

You said it Broo!