It is intriguing to know that the country of Belgium is divided into three regions, based on the differences of language- it has French and Dutch speakers. The region in the north is known as Flanders which consists of Dutch speakers, the southern region is Wallonia having French speakers, whereas, Brussels is in the central region which is the bilingual part of the country. Due to such various factors, Brussels is the official capital of Belgium as well. Being a part of the western region of Europe, one can evidently witness the impact of the European culture and architecture in Brussels.

The Brussels region is an amalgamation of 19 separate communes. Out of these, the city of Brussels is the capital city. It inhabits around 150,000 people, and has maintained its originality from the time it was formed, that is originally in the 13th century. Despite being such a small city in terms of population, the city of Brussels is without a doubt the most international city in the world. This means that it has the highest ratio of foreign inhabitants in comparison to its local people. Out of the total population of the city, 27% of the people are foreigners. Except for this, there a number of foreigners who has attained Belgian citizenship, they have not been included in this survey. Not only this, Brussels is also known as the capital of Europe as it has the highest number of European employees which work in the administrative part of the continent.

It would be a shame if one does not discuss the beauty of a European country. Each layman has a picture in their head about what kind of natural beauty would they come across in the continent of Europe. Well, Belgium keeps up to that expectation in a positive manner. It offers a remarkably varied landscape to the tourist. The region of Flanders comprises of enchanting medieval towns, which stretches out from Pajottenland to Brussels. In the eastern region of the country, it is like a separate era altogether. Due to the constant snowfall that blankets the region with snow, one gets the feeling that he is transferred back to the ice age. Apart from this, there is the exquisite valley of Meuse which stuns the person, whoever visits it with its beauty. 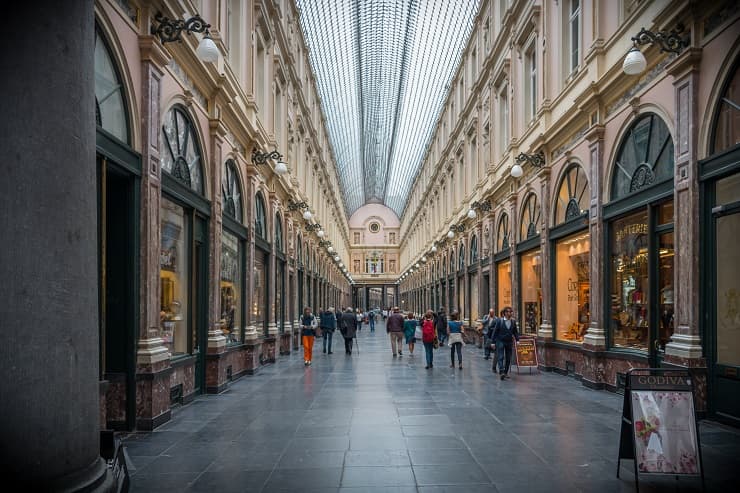 It is important to realize that Brussels isn’t all about European tourism and scenic beauty; it is much more than that. After the Second World War ended, Brussels has become a major center for international politics. It is also home to numerous international organization, diplomats, politicians, as well as civil servants. Apart from this, the city of Brussels holds important administrative offices of the European Union. This proves that Belgium serves as the center of administration of the European continent. Due to the presence of a large number of important offices in the country, people from various fields of professions flock here for official purposes.

Why is Brussels a popular investment location

The economy of Brussels is largely service-oriented. This is in accordance with the fact that the city is home to the regional as well as the world headquarters of significant multinational organizations. Not only does it have fancy companies situated here, but it also has notable craft industries which are the local Belgian small scale industries. Due to the presence of such important offices, Belgium is an attractive place for entrepreneurs to invest. Apart from this, the services provided over here are also convenient from the professional point of view. The international air, rail, and shipping infrastructure are competent enough, making it one of the best places for shipping and logistics. Brussels does not only offer a good opportunity for investment on a large scale. The economy over here is mainly tainted by private enterprises which offer a proximity to the investors to different markets and cultures as well.

One of the major reasons behind the high GDP rate in Brussels is that people from the surrounding regions of Belgium also flock here for professional gains. On being more specific, we can say that more than half of the people who work in Brussels originally live in Flanders and Wallonia. There are 230,000 commuters from Flanders and 130,000 commuters from Wallonia on an everyday basis in order to work here. This might be beneficial for the region of Brussels, but it has a drawback as well. Even though people from all around Belgium prefer to work in Brussels, this means that the wealth generated in this city will also be segregated to different parts of the country. According to the census carried out in December 2013, around 20.4% residents of Brussels suffer unemployment. This is because as there are workers from neighboring regions in the city, the employment opportunities of the local residents are put into jeopardy.

The private enterprise in Belgium is gaining immense significance because of its central geographical location and a well-developed transportation network. This makes it a favorable location for the entrepreneurs to invest in. Apart from these factors, it has a diversified commercial and industrial base. This means that there is not just one particular industry which dominates the market of Belgium. The country excels in various spheres of industrial and commercial projects, therefore luring investors over here. An important point is that Belgium was the first country in the continent of Europe to undergo an industrial revolution in the early 19th century.

Right from the industrial revolution, Belgium has always strived to get better in the economic market and has worked accordingly in that direction. It has maintained the consistency of its efficiency throughout the centuries. Over these years, it developed an excellent transportation infrastructure. The proper development of canals, railways, ports, highways, has encouraged better trade relations with the neighboring countries. This is because if the infrastructure for import and export is well-developed, other countries will readily agree to establish a business relationship with the host country. This is why Belgium focuses on its transportation infrastructure.

The country is known to export its raw materials to other countries and imports semi-finished goods. These goods are then processed by the local laborers and sold in the international market. Despite the limited supply of natural resources, the traditional industries like textile, steel, chemicals, refining, food processing, automobiles, electronics, pharmaceuticals, and machinery fabrication contributes heavily on the annual income of the country. Even though there are such a high number of industrial components in Belgium, out of the total GDP of the nation, 74.9% is contributes by the service sector whereas 1% is contributed by the agricultural sector.

Out of the total Gross National Product of Belgium, more than two-thirds of it is dominated by world trade. The country takes advantage of its central geographical location by putting in highly skilled, multilingual workforce which is efficient in its productivity. With the help of these two factors, Belgium cashes upon its world trade. Being one of the founding members of the European Community, Belgium has a significant contribution in the development of the European economy.

What is Brussels’ economic plan for the festive season

The city of Brussels has a special market to keep up with the festive feel of Christmas, which is known as Winter Wonders. This festive market is set up right in the heart of Brussels. The British tour operators have claimed that this market is the most original Christmas market in the entire continent of Europe. The Winter Wonders is organized from 25th November to 1st January every year. It is set up in and around the areas of Grand-Place, Place Sainte-Catherine, Bourse, and Marche aux Poissons.

The Winter Wonders Christmas market offers more than 230 stalls to shop from, which cater to all the needs one would desire for, be it wine or reindeer antiques, everything is on sale over here. The market is not just a shopping destination, but it is more like the celebration of Christmas which goes on for weeks over here. Apart from the stalls to shop from, the market also has entertaining attraction like the Ferris Wheel, ice skating rink, and the Merry-Go-Round. This makes the market a great business prospect for the local artisans as well as a fun-filled event. The city also has a special Christmas parade which is carried out in the evening for two hours and patrols around the main lanes of the city.

During the duration of this market, a 45 minute mini-concert in hosted every Friday afternoon near the ice skating rink, in the Grand Foyer of the La Monnaie. Thus, the Winter Wonders market is like a small township in itself which is solely constructed to make the festive season an enjoyable as well as happy one for the local population. Even though the market is a part of the Christmas celebration of the city of Brussels, it is a great business opportunity for hundreds of people. Especially for the small scale industries and local artisans, this is the most important event of the year in which they can attain commendable sale within the span of a few weeks.

Due to the stalls that are set up, hundreds of artisans are able to sell their creations. Also, each and every person connected to the market in a direct or indirect manner will earn something through it, even the people related to the entertainment section. For this reason, the Winter Wonders Christmas market is a great business opportunity for the Belgian entrepreneurs.

Anna Domanska
Anna Domanska is an Industry Leaders Magazine author possessing wide-range of knowledge for Business News. She is an avid reader and writer of Business and CEO Magazines and a rigorous follower of Business Leaders.
« Beer Yoga is here…and it’s not so brewtiful
How & Why Mundane Routine Is Killing Your Creativity »
Leave a Comment
Close

Companies have raised over $400 billion in the first three weeks of 2021 as stimulus packages from governments and central banks have led to...
22 mins ago

Alphabet-company Google has announced $150 million to promote vaccine education and equitable distribution of the vaccine. It will also open...
1 hour ago