Dear Google, Show Yourself Out of My House: Microsoft Cortana

Chrome tabs are known for killing an average of 1 hour of total battery life. Firefox outlasts the former, but Microsoft Edge is the clear winner. It’s official. The software giant’s blog claims that the Edge browser delivers an impressive battery life performance with 36 percent to 35 percent less power consumption.

But wait, here’s the kicker. A more energy efficient version of the new Edge browser will ship with the upcoming Windows 10 Anniversary Update, along with a few more technical expansions.

To measure the power consumption by browsers Microsoft engineers created two tests, all of which ran in a lab-controlled environment. In the first test, it measured typical browsing behavior on popular sites by opening multiple tabs – Facebook, Google, Amazon, and Wikipedia. In the second experiment, it measured how long streaming HD video lasts. As can be seen (image below), Google Chrome browser lasts only 4 hours and 19 minutes on the streaming video tests. While the latest Microsoft browser ran for 7 hours and 22 minutes. 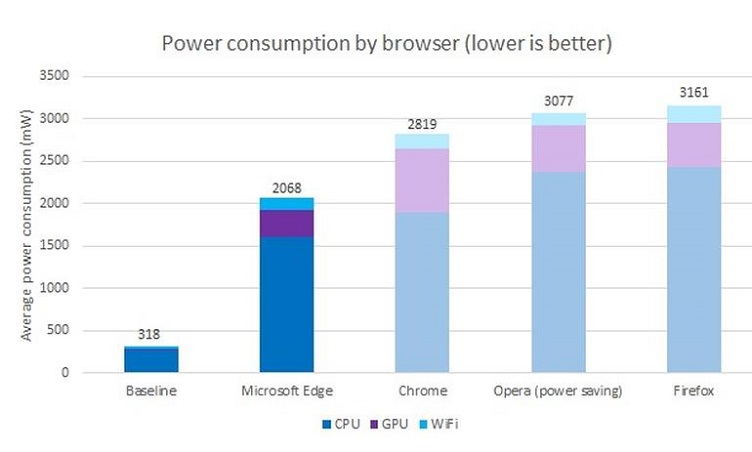 (IMAGE: Average power consumption in milliwatts for identical workloads in Microsoft Edge, Google Chrome, Mozilla Firefox, and Opera (with battery saver mode enabled). Unless specified, all browser settings were left at their defaults.)

With the Microsoft Anniversary Update to Windows 10 coming up this summer, the software company is desperate to win people over to Edge. For the most part, it lacks promising enhancements, some of which may get addressed this summer. 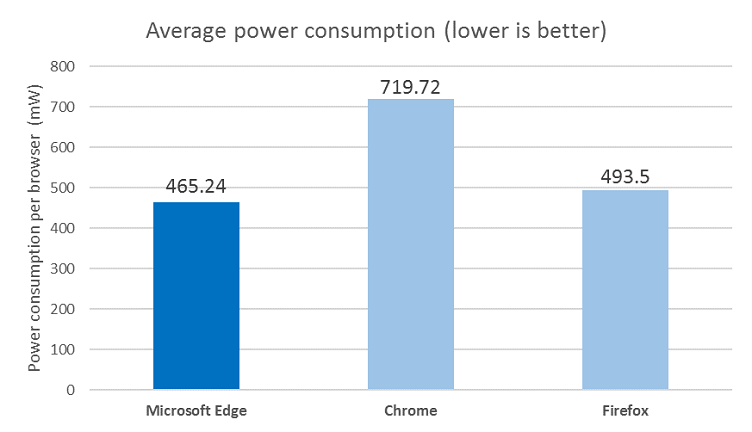 (IMAGE: Average power consumption per browser based on billions of data points of aggregated telemetry.)

Edge Program Manager Brandon Heenan, in today’s blog post, promised that the Anniversary Update will address JavaScript access in background tabs. It will slow down to running one per second instead of allowing it to run continuously in hidden tabs. They will “include even more power-saving improvements, using fewer CPU cycles, consuming less memory, and minimizing the impact of background activity and peripheral content like Flash advertisements,” Heenan wrote. They’re also planning to remove duplicate frames at the beginning and end of animation loops for Edge to perform better. There’s no word on unnecessary Flash ads, but let’s hope that they do something about it too.

Edge is a far better choice for Win 10 users, with 40% more battery life. Have something to say about Microsoft Edge? Share it in the comments.