With the growing demand for energy resources in the world, science experts have been working to find out alternative resources of energy. Energy experts focus on exploring renewable sources of energy in order to avoid running out of them. One of the popular sources is the energy produced through wind farms. But, this has also become an inconvenience as it occupies a humongous piece of land. It is important that there is hardly any civilisation around it, which is a huge difficulty due to the growing population of the world. As a solution to this, Britain has introduced its first wave farm which will produce energy.

This alternative source of energy will be set up in Cornwall, UK. Britain’s first wave farm is all set to generate electricity with the help of one device in 2018. If this device turns out to be a success, the establishment of fourteen other such devices is expected by 2020. On an average, all of these devices will provide enough electricity for 6,000 homes on its successful establishment.

An Australian company dubbed Carnegie Wave Energy has received a grant of $11,834,069 from the European Regional Development Fund. This grant has been provided to support the production of renewable sources of energy which do not occupy the land meant for human civilisation. It will also support the first phase of its planned commercial project which will be held at Wave Hub in Cornwall.

This wave energy production device will be called ‘Ceto 6’ after a Greek sea goddess. This device is different from the other wave energy devices as it operates underwater. Thanks to its underwater operation, it is not visible from the shore and can avoid larger storms.

This grant is just 65 percent of the total funding worth $18.5 million. This funding is for the project which will design, construct, install as well as operate the Ceto 6 wave device. Once it starts generating power in 2018, it will be the first wave farm of Britain. 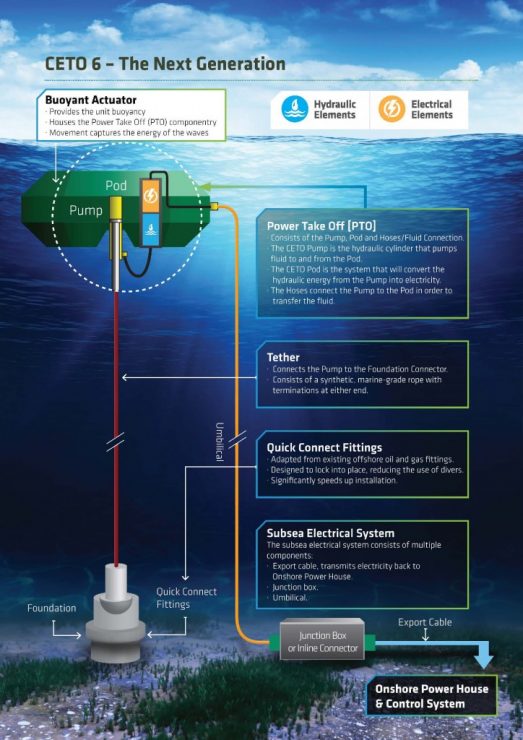 How does the wave farm work

The working of the wave farm relies on the Ceto 6 device. The device works with the help of a large float which is submerged in the sea. Because of the motion of the wave, the device is lifted and lowered repetitively. This motion will drive a pump as well as a generator. The power generated through this will be delivered to the energy outlets through subsea cables to be exported into the grid.

Accordingly, this plant will start providing 1MW of electricity from the year 2018. It is enough for 400 homes per year, and is expected to grow to 15MW by 2020. This will be possible with the help of fourteen such devices if the first phase of this project turns out to be successful. The power will be enough for 6,000 homes per year. The project will be Britain’s first wave farm which operates on multiple devices.