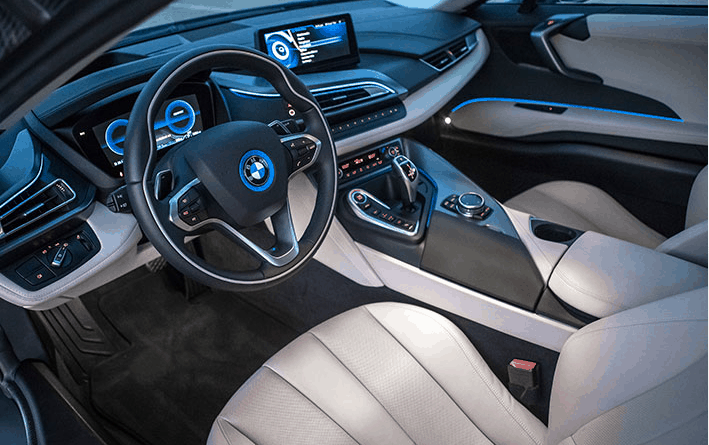 Launched in 2014, the new BMW i8 is preparing to receive its first update. The facelifted BMW i8 having hybrid powertrain is expected to hit in late 2017. The car will be equipped with a host of enhancements such as long range and extra power.

The late 2017 facelift is also bringing variants to the market. Apart from extended range and long power, the hybrid BMW i8 capabilities include various tweaks in the frame, a series of latest lightweight components, and an inductive option for charging. The changes are an important segment of a comprehensive facelift for the luxury high-tech 2 + 2 that went on sale for the first time in 2014, in the UK.

The hybrid frame will adopt an advanced powertrain i.e. petroelectric, which is currently being tested. The test criterions for the facelifted BMW i8 include road-going prototypes and the latest iteration of the safety car based on i8, which marks a prominent place at Formula E events across the world.

As of now, the information regarding the BMW i8 remains scarce, although the best in class engineers at research and development facilities of BMW in Munich have something to interesting share. According to them, the electric motor of the revised model will be more powerful as compared to the one used by existing BMW i8 i.e. 127bhp.

The electric motor carries three-cylinder gasoline engine of 1.5-liter at present, so it will also be upgraded as reported by Autocar. The total combined output of power would touch 420 horsepower while the current model reaches 362 horsepower.

The laundry list of advancements would eventually result in an even faster car because the automatic transmission having six-speed will be subjected to upgrade as well. As of now, the car hits 62 miles per hour in 4.4 seconds. As far as battery packs are concerned, the capacity of the latest batteries isn’t disclosed yet. But the battery pack is most likely to remain unaltered. The safety car has already experimented with the inductive wireless charging system, HALO, which has been engineered by Qualcomm, a partner of BMW. So, we can expect it to appear in the new BMW i8 as well.