Cell phones that devilishly wait for warranty to be up before going on self-destruction mode now have a rival, Boeing’s Black Ultra-Secure Smartphone. 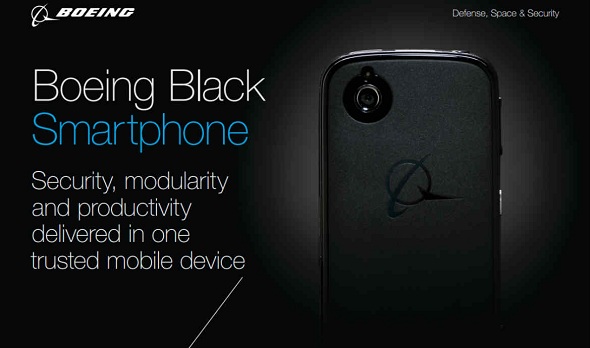 The smartphone does not have a value or discharge rate yet, the company confirmed that it will be selling it to agencies only.

The Chicago-based Boeing Company, primarily an Aerospace and Defense contractor known for making jetliners and fighter jets, will now make room for expansion of its existing ‘Communication Division’. The aerospace manufacturer already provides secure communication to US government authorities – including the president. Boeing has filed plans with the Federal Communications Commission (FCC) for developing an ultra secure smartphone christened Boeing Black. The smartphone has the ability to self-destruct in less than 30 seconds if an embedded technology detects that the phone is being tampered with. Sadly, average customers stand no chance to turn their backs on the prying eyes of NSA since it won’t be made available to them for mainstream use.

The device, named Black, joins the advancing ecosystem of high-security cell phones entering the market. Assuming that the smartphone is messed around with, it immediately erases any information and renders itself inoperable. It took 36months to produce, and has drawn mastery from recent acquisitions of companies specializing in mobile technologies. Product Specifications posted on Boeing’s website state the device holds two SIM cards in order to allow switching between government and commercial networks. It runs a profoundly customized version of Google’s Android OS as well as Boeing’s own branded security applications. The smartphone does not have a value or discharge rate yet, but the company confirmed that it will be selling it to agencies only.

Boeing Black goes past ordinary mobile security is in physical enhancements to the hardware itself. The company explained in the documents sent to the FCC that there are no serviceable parts on Boeings Black phone and any attempt at servicing, adjusting or replacing parts might decimate the entire product.

The Boeing Black phone is manufactured as a sealed device with the help of extremely strong glue epoxy around the casing and wit screws. The heads are covered with tamper-proof seal to identify attempted dismantling. Any attempt to break open the casing on the unit might trigger functions that erase the information and software contained within the device making it inoperable. Moreover, the smartphone’s hardware fittings can be stretched in order to incorporate biometric sensors, satellite receivers or solar panels.

The smartphone has been developed since there is explicitly nothing on the market that could meet the needs of the U.S. Defense and Security Communities. The device is supposed to be marketed and sold in such a manner that very low level technical and operation information about the product will reach the ears of the public making it more intriguing and exclusive. The smartphone is said to have a 4.3-inch display, will be powered by dual 1.2GHz ARM Cortex-A9, and will run on all bands from GSM and WCDMA to LTE.

A similar-titled Blackphone was announced at the Mobile world Congress aimed specifically at business and consumers worried over private data.