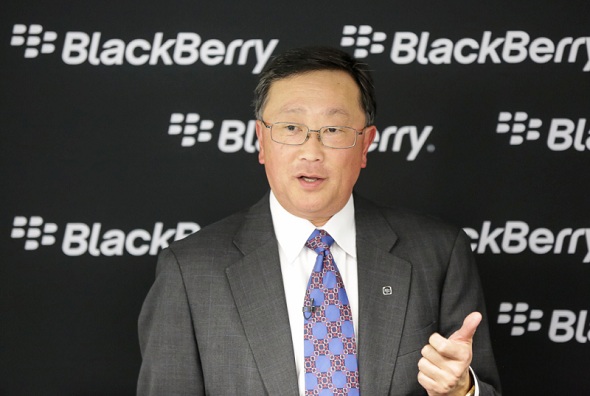 Waterloo, Ontario based BlackBerry Inc., posted a loss of $207 million in the second quarter on Friday just days after the launch of its new passport smartphone.

CEO John Chen said on a phone call with financial analysts that BlackBerry is “definitely in the first half” of an eight quarter turn around.

“Our work force restructuring is now complete, and we are focusing on revenue growth with judicious investments to further our leadership position in enterprise mobility and security,” Mr. Chen said in a statement. “We might not be at the lowest point but we are near the bottoming out of this revenue,” he added.

Chen took over as a CEO about 10 months ago after a fizzled sale attempt, repeated his statement that he needs the company to come back to a certain profit zone before the end of the financial year in February 2015.

“BlackBerry is a company that’s going to take a much longer time to turn around,” said James H. Gellert, chief executive at Rapid Ratings, an independent corporate risk assessment company. “We are still in a limbo period for them, there’s a lot left to prove.”

BlackBerry lost two cents per share on a balanced premise with total revenue of $916 million in the previous quarter. This quarter’s $207 million loss is quite meager compared to the massive loss of $965 million it made last year.

In a survey, financial analysts responded saying that they had expected a bigger balanced loss of 15 cents per share on much higher sales of $951 million.

Since Chen began his tenure as the CEO, he has put a lot of stress on BlackBerry’s mobile device management business, which is an amalgamation of software that permits IT professionals to oversee all sorts of gadgets connected to their respective corporate networks. He has additionally accentuated BlackBerry messaging service and also the embedded QNX programming systems, which are utilized as a part of vehicle infotainment systems and various industrial machines.

Chen is interested in making products for the mass market consumer again, he said in the statement. “I need to base our recapturing of the enterprise customers for this company to get back on track, financially,” he told reporters. “I am by no means suggesting that this is the only thing that I’m going to do. Over time, I would definitely like to reach the everyday people. But, it’s too early for us right now. One thing at a time.”

Earlier this week, BlackBerry launched the new BlackBerry Passport, unique square-shaped smartphone targeted toward the business user or the professional user in Toronto. No information of a launch event in the US was revealed for the new smartphone where BlackBerry has lost its grip with the advent of Apple’s iPhone and Google’s Android-powered smartphones.