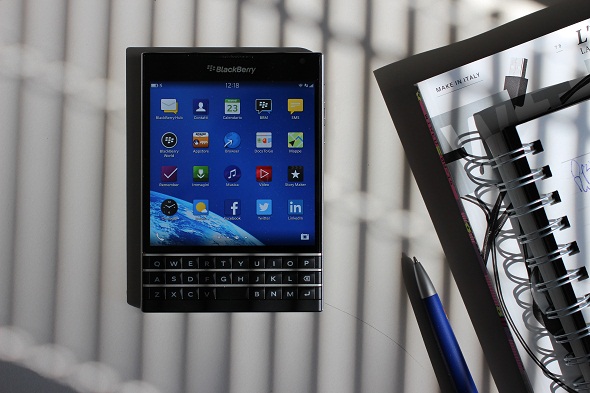 BlackBerry Passport will cost $199.99 with a two-year contract or for $650 without a contract from the carrier.

According to a report BlackBerry fans within the United States will soon be able to get their hands on the newly launched BlackBerry devices – Passport and Classic which will be made available through AT&T online or via retail stores across the country on February 20th. Previously, the Passport had been available online at full price for a few months.

The BlackBerry Passport will be available exclusively through AT&T in the United States, the company said. However, it is unclear whether that pact will continue or if it is a timed exclusive deal.

The BlackBerry Passport has a large 4.5-inch display, 1440 x 1440 pixels with touch-enabled QWERTY keyboard. The phone was redesigned specifically for AT&T with rounded edges. The device packs a 3 GB of RAM, a Qualcomm Snapdragon 801, 13 MP rear camera, 32 GB of internal memory, a 3450 mAh battery and runs the BlackBerry OS 10.3.1 operating system.

The Classic, on the other hand still offers the same squared edges similar to the previous devices. It has a 3.5-inch touchscreen (720×720), QWERTY keyboard, archaic Qualcomm MSM 8960 processor with 2GB of RAM, 8-megapixel camera, 1080p HD video recording, 16GB of internal storage and 2515 mAh battery. It also comes with the secure BlackBerry 10 OS 10.3.1 operating system.

Both devices have been crucial for BlackBerry, as they have managed well to sell enough to keep the company afloat for the past few years.

Having fallen from the top of the market within the past five years, the smartphone maker has gradually shifted their attention towards business-class software and services. However, Blackberry’s smartphones will be required to do well in the market to keep their new sources of revenue flowing.

Currently BlackBerry is facing a lot of challenges as consumers have already formed their own opinions about the company and its smartphones. However, the BlackBerry Passport is helping to change those previous misconceptions. The launch of their new operating system, BlackBerry 10, also helped to cement their place in the mobile market once again.

Anna Domanska
Anna Domanska is an Industry Leaders Magazine author possessing wide-range of knowledge for Business News. She is an avid reader and writer of Business and CEO Magazines and a rigorous follower of Business Leaders.
« Hacking ring reportedly stole up to $1 billion from banks, Kaspersky report says
Nestle to remove synthetic flavors, colors from its candy by the end of 2015 »
Leave a Comment
Close

Blackstone, the private equity firm, is planning to acquire St Modwen Properties, a logistics and housing developer, for £1.2bn ($1.68 billion) in a bid to take advantage of the P
15 hours ago