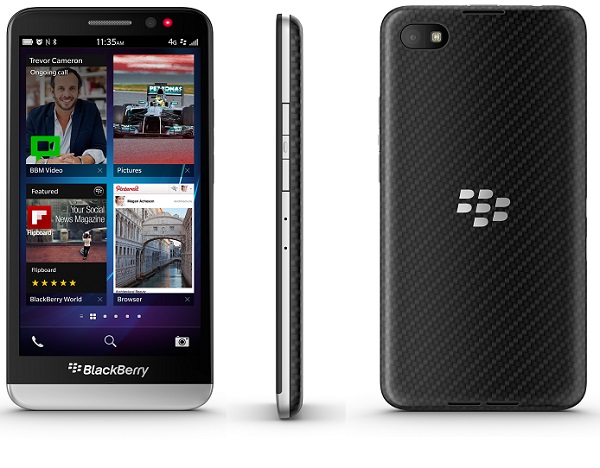 BlackBerry officially introduced its latest touchscreen smartphone the BlackBerry Z30, the latest model that features a 5-inch display, a larger battery, stereo speakers and this is also the first device to run the 10.2 version of its BlackBerry 10 operating system.

In spite of the buzz that filled about the launch BlackBerry chose a low key format to unveil the Z30 without involving any major press conference like the Z10 launch that had multiple global locations.  The announcement comes as Apple released iOS 7, and the launch the New iPhone 5C and New iPhone 5S this Friday.

The launch of Z30 comes amid speculation that BlackBerry is actively exploring other options, which is the board is looking to sell the company off by November. Speculations are rife about partnerships and joint ventures. Concerns have been raised on BlackBerry’s viability after a slow first quarter, which saw very low number of BlackBerry 10 devices being sold. The company will declare its fiscal second-quarter results around next week. Rumours about layoff have only heightened those fears.

The Z30 features a larger 2880mAh battery that boasts 25 hours of mixed use. Other additions include stereo speakers and a new Paratek Antenna technology which strengthens reception and provide better connection in low-signal areas.

BlackBerry appears to follow Samsung’s Galaxy range, the trend to go bigger with screen size. The Z30 features a 5-inch Super Amoled display which includes a 1.7-gigahertz processor and quad-core graphics. The 5-inch Super Amoled screen is the biggest ever on a BlackBerry, and the stereo speakers are augmented with BlackBerry Natural Sound which seems like some sort of surround-sound scheme from the announcement.

On the software side, the Z30 which comes with latest version of BlackBerry 10.2 features an aggravated Hub that asserts importance to certain contacts and messages. There is a new notification system with BlackBerry Messenger, and the possibility to have icons on the lock screen for improved messages and notifications. BB 10.2 will be available to the existing BlackBerrys starting mid-October.

According to BlackBerry’s representative the Z30 will release at selected few carriers and retailers in the U.K. and the Middle East beginning next week, with the other regions coming ahead of the holiday season. In Canada the carriers will release their availability dates soon and details for a U.S. release would come shortly.

Christy Gren
Christy Gren is an Industry Specialist Reporter at Industry Leaders Magazine she enjoys writing about Unicorns, Silicon Valley, Startups, Business Leaders and Innovators. Her articles provide an insight about the Power Players in the field of Technology, Auto, Manufacturing, and F&B.
« Will the launch of Iphone 5S and Iphone 5C elevate Apple’s Sales Graph?
Despite flaws, New Apple iOS7 getting popular »
Leave a Comment
Close