BlackBerry and Samsung come together for better Android security

BlackBerry Ltd announced partnerships with Samsung Electronics Co. to provide a new level of security on Android devices, broadening the reach of its new mobile-device management and security platform. 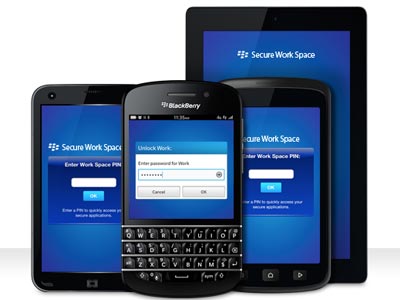 Early in 2015, Samsung will integrate BlackBerry’s BES12 end-to-end encryption service, into its own Knox security software that will add an extra layer of security to Android devices. The Android security enhancements will also help to minimize potential damage posed by flawed applications and separating business and personal data. This includes smartphones and tablets such as the Galaxy S5 and Galaxy Note 4. Both companies aim to use their security offerings to give enterprises a single tool that can manage both BlackBerry devices and Samsung’s Android-powered hardware.

The joint offering will be aimed at enterprise customers that need “enhanced levels of security on Android devices,” according to Injong Rhee, senior vice president of Samsung’s Knox Business Group.

According to the latest figures from Strategy Analytics, BlackBerry has seen the market share for its mobile OS has consistently dwindled for years, and at present holds less than 1 percent of the global market.

Meanwhile, world’s No. 1 smartphone maker Samsung is facing heavy competition from Xiaomi and other fast-growing Chinese makers of Android devices. The South Korean conglomerate has also found it difficult to gain traction in the Apple-heavy enterprise market for mobile devices.

Working together, BlackBerry and Samsung are “committed to deepening the interaction between our engineering and product development teams for the long-term,” said John Sims, president of global enterprise services for BlackBerry. “It is a natural progression in our path to providing our customers with more alternatives to meet their evolving mobile needs.” Sims added that the new partnership would enable BlackBerry to closely integrate the capabilities of its new BES12 platform with the Samsung Knox hardware and software security features.

Among the other features in BlackBerry’s BES12 platform, the WorkLife feature will let enterprise users to include a separate corporate phone number on personal devices, while employees can also add a personal phone number to company-provided phones. Regardless, communications related to work will be charged to the corporate user while personal communications will be charged to the employee.

According to a study by Loudhouse Research released by BlackBerry, including such capabilities will be highly important as enterprise users go ever more mobile. The survey which included 780 corporate risk, governance and compliance leaders at companies in highly regulated industries found that 76% of them believe that legal liability and lawsuit risks will increase unless their organizations make a considerable effort to support extensive enterprise mobility management strategies.

Christy Gren
Christy Gren is an Industry Specialist Reporter at Industry Leaders Magazine she enjoys writing about Unicorns, Silicon Valley, Startups, Business Leaders and Innovators. Her articles provide an insight about the Power Players in the field of Technology, Auto, Manufacturing, and F&B.
« Yahoo acquires video-advertising service BrightRoll for $640 Million
Facebook updates its privacy policies to make it easier to understand »
Leave a Comment
Close