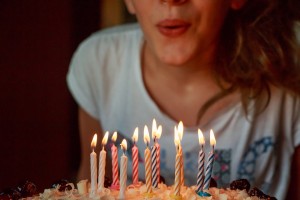 As the demand for Snapchat is growing day by day among millennials, the popular video messaging application wants to know your age and help you celebrate your birthday on its social networking platform.

A new feature has been added to the popular video messaging app known as Birthday Party, which provides users a special birthday treat in the form of Exclusive Birthday Lens by making snaps of the user fit for a birthday celebration by adding confetti and balloons. The Exclusive Birthday Lens, will also help users to send snaps with a special birthday greeting to their Snapchat friends.

It is a sticker that reads ‘Happy Birthday’ with confetti falling all over, which can be added by users in an image or selfie.

Additionally, a cake emoji will also appear on a user’s birthday next to his or her username, and friends of the user can have an access to the Exclusive Birthday Lens by tapping on the cake emoji.

So, if you are a Snapchat user, and if it is your birthday, you can get an access to exclusive birthday lens feature and apply it on your snaps to make your friends aware of your special day.

You can enable the feature by going to Main Settings, which is located in the Birthday Menu. Set your birth date.

You can notice two separate exclusive birthday lens on the menu. One lens will appear on the eve of your birthday while another lens is for the purpose of friend’s birthday.

Double tapping the lens will open the camera to snap a picture and activate birthday lens.

By enabling, a birthday cake emoji should appear that will allow your friends to notice your special day.

Unfortunately, the Birthday Party feature will only permit you to change your birth date for a limited number of times.

Facebook has made the process of wishing ‘Happy Birthday’ as a common practice on social media.

Unlike Jack Dorsey’s Twitter, which asked users to enter their birth date for the first time in order to add a birthday feature on Twitter, Snapchat delivered this facility to everyone after mid of the year 2013, it is just that the popular mobile storytelling application decided now to make the feature more social like Facebook does.

The introduction of exclusive birthday lens provides a more personal touch to the app, making it look more exciting based on its popularity amid millennial audience.

The touch of personalization will target more users and the data point will offer valuable data to marketers and data who want to target their campaign based on particular age groups, and understand more about the audience using this popular application.