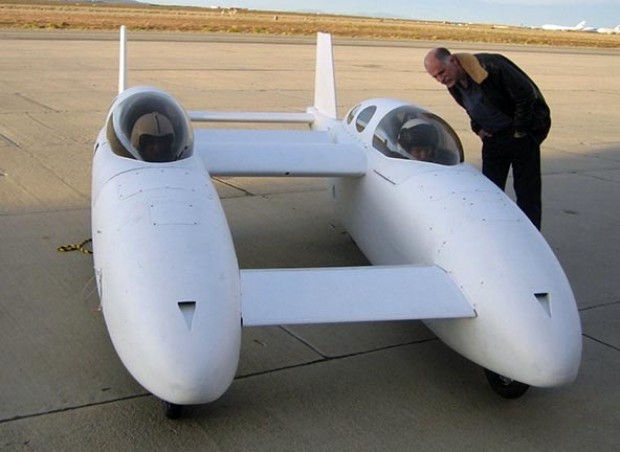 From beginning the preliminary design, to actually executing the first flight of the air-car, the BiPod was developed by the Scaled Composites team over a short 4-month period.

Conceptually, the BiPod was Burt Rutan’s dream car; electric, and with wings.

While to start with, the BiPod had been conceptualized as a rapid, low-cost electric test bed, the final result is a flying car hybrid gasoline-electric flying car which has been made using as many off-the-shelf components as possible, in order for the car to be completed before Rutan’s retirement in April this year.

Featuring a twin fuselage configuration with a 4-wheeled chassis with two cockpits, the BiPod has been designed to perform safe ground operations as well as achieve efficient high speed flights, with a protected storage area that allows the wings and tail surfaces to be stowed away during ground operations.

Enabled through the use of electric power transmission, the personal craft has two 450cc internal-combustion engines, one per fuselage, which provide electrical power to the rear wheels and propellers located on the horizontal stabilizer by way of a generator.

Additional energy for take-off is derived from lithium batteries located in the nose of the flying car.

A Pre-cursor for VTOL concepts ?

With an increasing number of cities across the world toying with green transportation alternatives, VTOL (vertical take-off and landing) and roadable concepts have become quite topical in the recent past.

While Rutan’s Scaled Composites has developed a number of revolutionary aircraft concepts such as  the GlobalFlyer, sub-orbital spaceplanes SpaceShipOne and SpaceShipTwo and its launch aircraft White Knight Two, the company’s founder has apparently been mulling over developing a personal electric aircraft for almost a decade.

The BiPod’s innovative design offers the ability to operate as a high-performance airplane with STOL (short take-off and landing) capabilities, a 200 mph (322 km/h) maximum speed and range of 700 miles (1,127 km) or as a road commuter vehicle capable of freeway speeds, urban driving and garage storage.

Scaled Composites has said that while they don’t have any immediate plans to commercially produce the BiPod, also called Model 367, they are continuing to test and develop the BiPod configuration and hybrid propulsion system with the aim of using similar systems on future aircraft configurations.