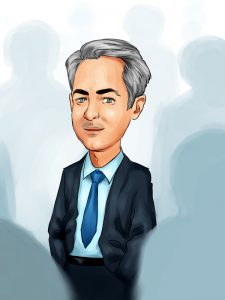 Billionaire hedge fund manager Bill Ackman is betting on a decline in credit markets as COVID-19 cases surge nationwide. His hedge-fund firm, Pershing Square Capital Management, has bought a set of credit-default swaps to insure against a wave of corporate defaults.

The bet is 30 percent the size of the hedge-fund’s insurance on declining credit markets in February. The successful bet netted him a profit of $2.6 billion against insurance of $27 million on credit-default swaps.

“I hope we lose money on this next hedge,” Ackman told a Financial Times conference on Tuesday. “We’re in a treacherous time generally and what’s fascinating is the same bet we put on eight months ago is available on the same terms as if there had never been a fire and on the probability that the world is going to be fine.”

“The market is saying that the world is incredibly safe, and everything expected to go right will go right,” Ackman said. “I’m long equities and still short investment-grade credit, and I feel very comfortable in that position.”

The announcement was made on the same day as the promising Pfizer vaccine announcement. The latest COVID-19 vaccine development was “actually bearish,” Ackman said at the event. The hedge-fund manager believes that the vaccine progress news will prompt Americans to not wear masks, allowing the outbreak to spread more rapidly.

Bill Ackman’s trade during the last quarter brought cheers of boosted performance. Pershing Square Capital, which had plunged by 7 percent before the COVID-19 outbreak was able to rise through the credit swaps into fresh stock bets and is now up by 44 percent this year.

It should be noted that Ackman received a lot of flak for his role in the news cycle that followed COVID-19 shutdowns. On March 18, the hedge-fund manager, sent tweets to President Donald Trump, recommending a nationwide lockdown to curb the outbreak.

On the same day, Ackman appeared on CNBC to warn that “hell is coming.”

The hedge-fund manager is sitting on a $5 billion blank check company that he used to try to acquire bigwigs like Bloomberg and Airbnb.

Anna Domanska
Anna Domanska is an Industry Leaders Magazine author possessing wide-range of knowledge for Business News. She is an avid reader and writer of Business and CEO Magazines and a rigorous follower of Business Leaders.
« U.S. Cruise Industry Facing Major Losses Due to Covid-19 Fears
Rolls Royce Raises 2 Billion Pounds in a Rights Issue »
Leave a Comment
Close