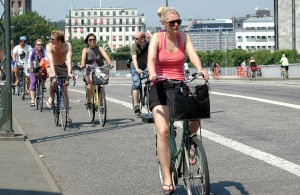 With cities like Amsterdam, Copenhagen and Melbourne having made cycling a way of life towards more sustainable living, the next question obviously was, ‘how could bike riding be made even more efficient?’. And who more appropriate for coming up with an answer but the Dutch!

The town of Krommenie, north of Amsterdam, will soon boast the SolaRoad, a bike path embedded with solar panels to produce clean energy while encouraging people to get on their bikes.

Demonstrative of the Dutch government’s commitment to renewable energy, the SolaRoad project will be operational by 2012.

The project has been developed by the TNO research institute along with the Province of North Holland, the construction firm Ooms Avenhorn Group and technology business Imtech.

The Dutch Government’s vision is to have an entire network of roads encapsulated with solar panels throughout the country. In the meantime, it will be interesting to learn what cyclists in North Holland think of riding on this glass-surfaced bike path.

In lay terms, the SolaRoad bike path will consist of a cycle track covered with solar panels.

But of course it’s a bit more complicated than that.

The SolarRoad will be constructed of a concrete base 1.5 to 2.5 meters (about five feet to a little over eight feet) thick, on top of which will be an extremely strong glass surface.  Under the glass will be a 1 cm (about .4 inches) thick layer of crystalline silicon solar cells.  The heavy-duty glass/solar cell layer will be tough enough to drive a truck over it.

The Dutch Government’s long-term vision is for SolaRoads to be on every road within the Dutch road networks system. Given that every square meter provides about 50 kilowatt hours per year, and the approximately 137,000 km of roadway that exists in the Netherlands, the electricity so produced would be able to power streetlights and homes all along the SolaRoad network.