BIG’s new conceptual architecture, Oceanix City, reminds me of Kevin Reynolds’s Waterworld, a post-apocalyptic science fiction movie released over two decades ago. It’s a dive into an imagination of what the human race would face if the chunk of ice at Antarctica melts completely, perhaps, abruptly and without plans of a life with no “Dryland.” Oceanix City concept, designed by Bjarke Ingels Group, is a strong message that human civilization is on a path to defend itself, at least from future sea rises.

Oceanix City is basically a floating city that consists of an atoll-looking cluster of buoyant islands arranged in groups of six to form a 12-hectare village that would house 1,650 people. The village is then replicated to form a hexagonal module that could accommodate up to 10,000 residents. According to BIG, which unveiled Oceanix City last week at the United Nations’s headquarters in New York during a round-table discussion on floating cities, the floating city would be home to people threatened by rising sea levels and other extreme weather. 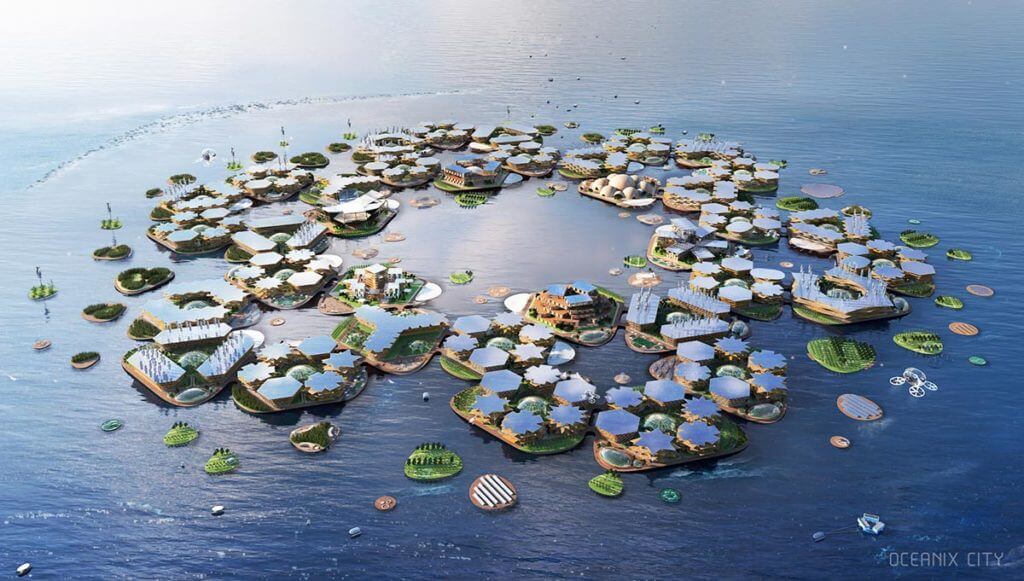 “We’ve based it on this modular idea of a hexagonal island,” said BIG founder Bjarke Bundgaard Ingels at the roundtable. “It has the omni-direction of a circle but it has the modularity and rationality of something manmade.”

BIG was commissioned to develop the Oceanix City by a company looking towards building floating structures, Oceanix. The scheme will also receive contributions from MIT’s Center for Ocean Engineering, Sherwood Design Engineers, USA-based Explorers Club, and a few other teams with varying unique specialties. 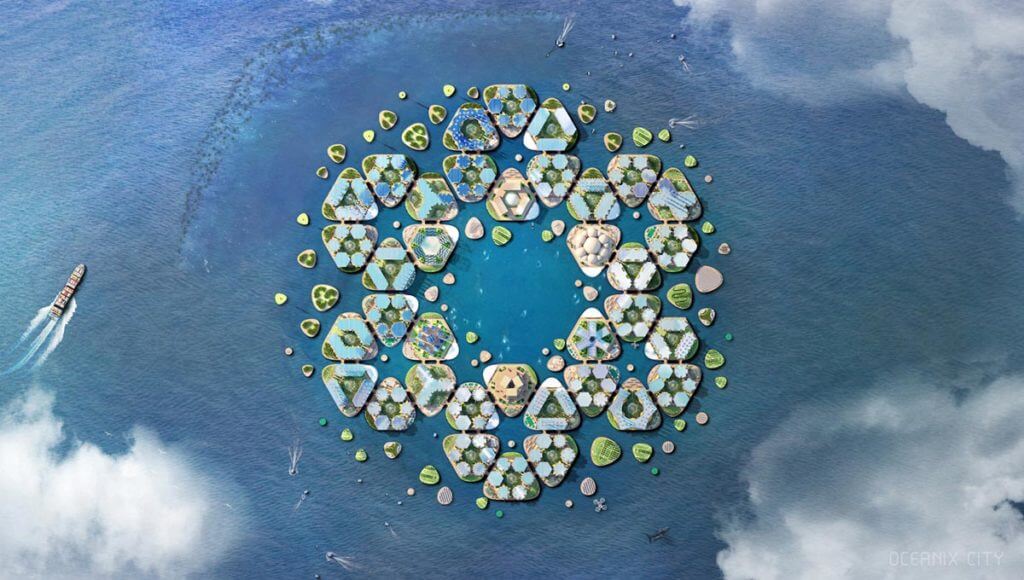 The miniature islands are designed to withstand tsunamis, floods, and category-five hurricanes. And the city is planned to provide a habitable, off-shore home in the event of extreme weather due to climate change, anticipated to affect a greater number of the world’s coastal cities by 2050.

BIG plans to construct the buildings from locally sourced “renewable, warmth and softness to touch” materials such as fast-growing bamboo and wood. For self-sufficiency, the city will consist of multiple renewable energy sources like solar panels, wind turbines, and water turbines. It will also be integrated with food production and farming, and a zero-waste policy. The modules would be built on land before they are moved to sea, where they would be anchored in a flexible arrangement such that the cities could be moved if water levels drop really low. 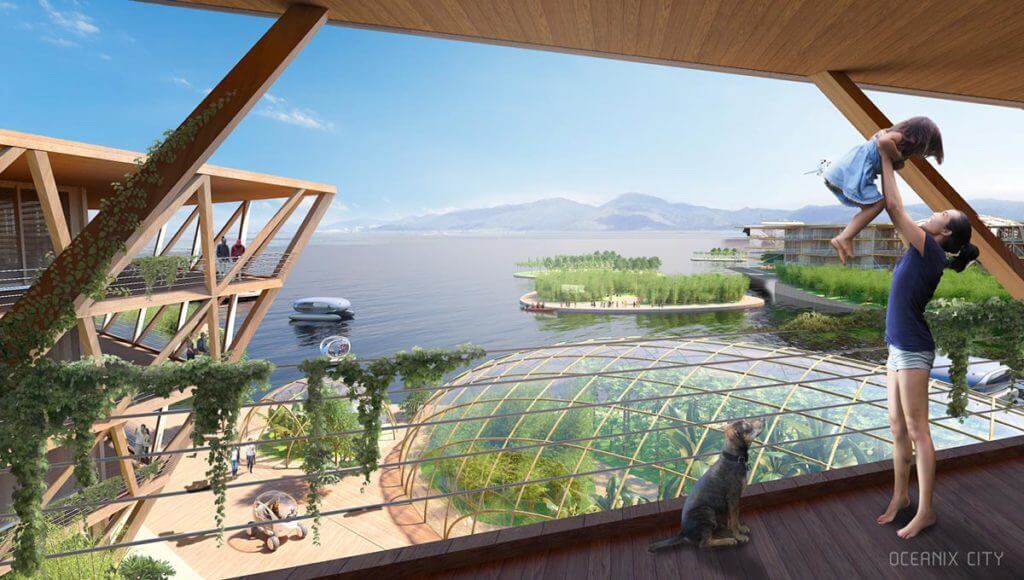 The team will create 3,000 square meters for outdoor agriculture in each island which will also be designed to be “enjoyed as free space,” Ingels said.

The modules will feature low-level buildings, perhaps between 4 to 7 stories, in order to maintain the center of gravity. The structures will also be designed to feature wider roofs to provide considerable shading while also offering enough space for solar panels.

BIG wants to make the Ocean City very inclusive; featuring “any culture, any architecture,” and would be developed to include community framework for living such as markets, water baths, cultural and spiritual hubs. The floating city is also intended to be developed first in tropical and sub-tropical areas largely prone to flooding. However, the scheme is poised to offer a living environment that’s extensively attractive. 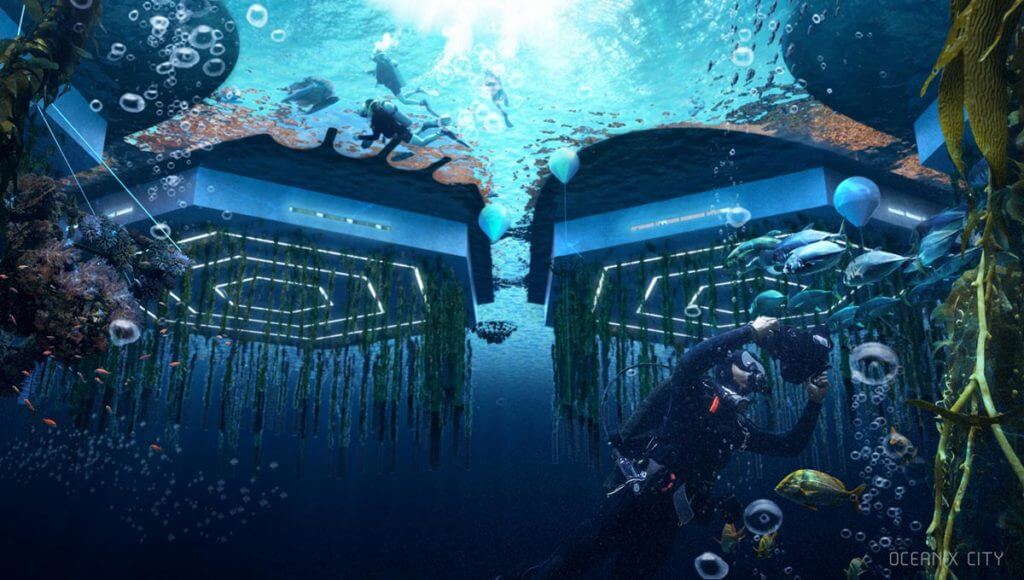 According to Oceanix co-founder Marc Collins Chen, the city offers an affordable development, and this major benefit it a solution to displaced societies.

BIG is aiming at making sure that sustainable floating cities are both affordable and available to coastal areas in need of the scheme. Oceanix City “should not become a privilege of the rich,” Chen said.

“The concept does not imply that we will all be living at sea in the future, ” said Ingels.”It won’t be Waterworld.” The idea is to create another form of habitation for humans that can grow its success while becoming environmentally and socially desirable to live, he added. 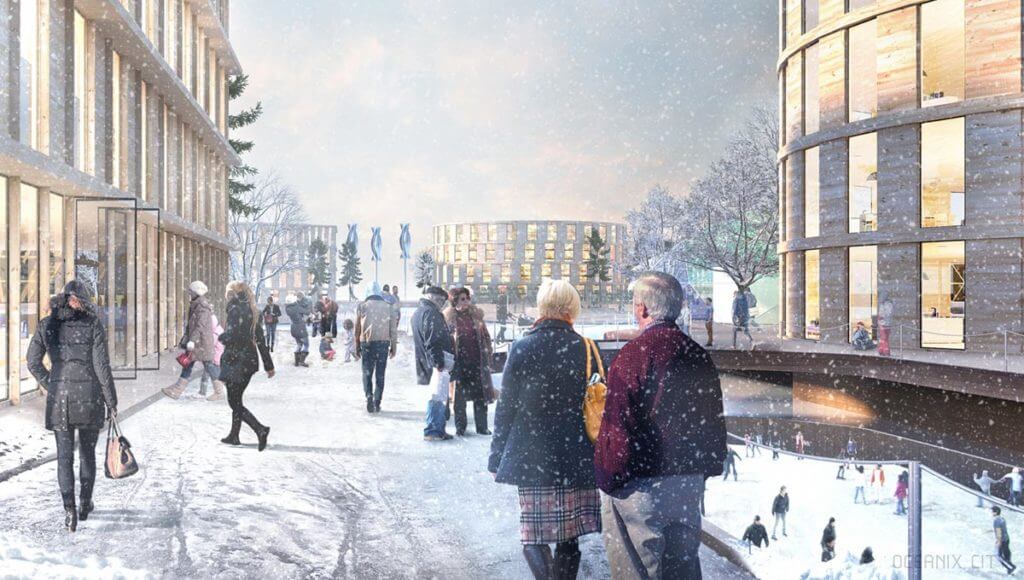 It’s our responsibility to “build cities for people, not cars,” knowing that the people would be facing challenges from climatic change such as sea level rising and storm. “Floating cities can be part of our new arsenal of tools,” said Mohammed.

Fruition is the major question here. But like other city concepts still in paper, Oceanix City has an edge. It’s a project backed by the UN’s agency for sustainable urban development and the United Nations Settlement Programme (UN-Habitat).

The team will begin now to develop a prototype that would be docked at the East River close to the UN’s headquarters in New York in a few months.

However, Oceanix City is not the first concept promising solution to rising sea levels. The first UK’s amphibious house was launched back in 2016 and more floating homes that can escape flooding are being built by Baca architects. Similarly, on Amsterdam’s river Jburg are colonies of floating houses designed to address flooding.

Anna Domanska
Anna Domanska is an Industry Leaders Magazine author possessing wide-range of knowledge for Business News. She is an avid reader and writer of Business and CEO Magazines and a rigorous follower of Business Leaders.
« Innolith battery technology will bring electric cars with 600 miles of range
Disney revealed its streaming service’s launch date and its just 6 months away! »
Leave a Comment
Close