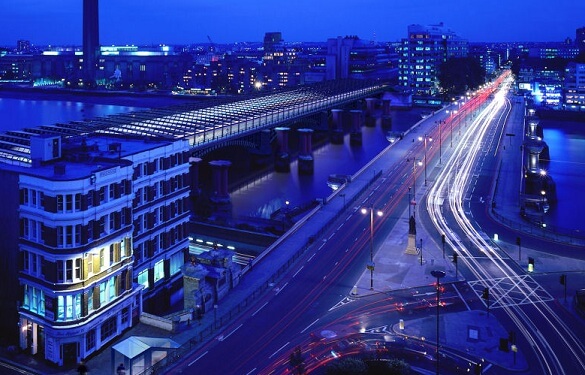 In a thrilling bit of news, the latest in development merges with the latest in building and the latest in environmental reforms, as construction on the largest solar bridge in the world begins. Located in the heart of London, the Blackfriars Station is going to be the proud new site of the biggest solar panel bridge ever- with more than 4,400 solar photovoltaic cells covering an impressive area of a whopping 6,000 square meters. The solar panels are being installed into a Victorian bridge arching over the Thames river, which also serves as the base of the Blackfriars Station.

The construction of the solar panel bridge is being heralded as a stroke of genius by all international industries, ranging from construction to environmental outfits, and much good is expected to come out of the decision. It has been estimated that around 900,000 kWh of electricity will be produced by the solar bridge, and this will account for half of the station’s energy needs. The solar bridge is also expected to decrease carbon dioxide emissions by an astounding 511 tonnes each year.

And that’s not all! The solar bridge will also serve as the inspiration and base for other environmentally friendly and positive measures that are going to be adopted by the station authorities, such as sun pipes that will be used to produce natural, eco-friendly lighting for the station as well as installing rainwater harvesting systems.

The Blackfriars Station is being renovated under the Thameslink program, which aims to renew the train services plying to and fro Bedford, Brighton and London. The vision is to create longer train routes, while improving the stations and making them more roomy, modernized and comfortable, in addition to the enhanced on-board services that passengers will be treated to. At the heart of this service-oriented development program is the dream of an ecologically safe and environmentally progressive concept. The decision to incorporate renewable sources of energy and combat the advent of climate change and global warming has been met with much approval in the global community.

Spearheaded by Network Rail, the project is being brought to life by London-based solar engineering giant Solar century in collaboration with Jacobs and SANYO Electric Co. Ltd.