As this year is going to be all about safety and social distancing, here is little nostalgia to get the spirits rejoicing.

Holidays are tailor-made organic marketing opportunities for brands to make a mark. Many companies associate themselves with a particular holiday or sporting or entertainment event, and audiences wait for the latest marketing promotion or unique ad related to it.

Fourth of July is a celebratory day filled with patriotism, family gatherings, fireworks, flags, parades, BBQs or picnics. According to NRF data, the Fourth of July is the eighth biggest holiday of the year for consumer spending- behind Christmas, Mother’s Day, Easter, Valentine’s Day, Father’s Day, Halloween, and the Super Bowl.

This year the situation is slightly different with the Pandemic at its peak in the United States. The single-day spike in cases is quickly reaching 50,000 in a day. The message this year is clear— Skip the party and Stay at Home. 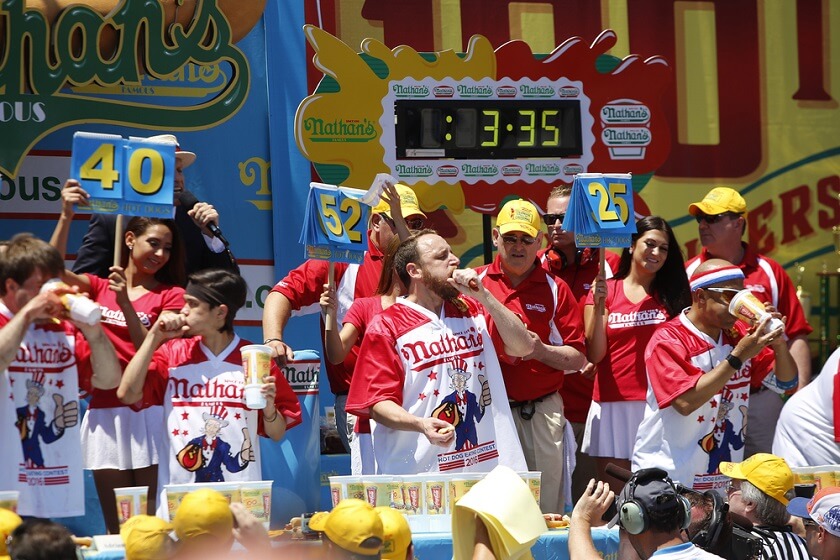 As this year is going to be all about safety and social distancing, here is little nostalgia to get the spirits rejoicing.

We list here events and brands that mark July 4 uniquely.

1) Nathan’s Famous hot-dog eating contest this year is on but differently.

It is an American holiday tradition held on the corner of Surf and Stillwell Avenues for generations, but will instead take place in a private location with COVID-19 safety measures in place.

“We’re ecstatic to make the announcement that the Hot Dog-Eating Contest will take place this year,” said James Walker, Nathan’s Famous Senior Vice President, Restaurants. “2020 has been a year for the history books, and the realization that this storied July 4 tradition would be able to occur, is a great feeling. With that being said, our country and our world has endured so much in the last couple of months that we’d be remiss if we didn’t use this moment to honor those that have done so much for each of us during this time.”

The contest, which features an annual donation of 100,000 Nathan’s Famous hot dogs to Food Bank for New York City, will be dedicated to raising funds for food banks and to raising awareness of food bank needs.

ESPN will air its noon ET telecast of the contest, which will include only five eaters rather than the usual 15 to allow for social distancing.

A yearly event that is a part of the Independence Day celebrations. This year there were fears that the July 4th celebrations will be canceled, but the latest reports say that Macy’s is holding a series of smaller displays throughout the five boroughs of New York. The locations and timing of the smaller displays are not being announced beforehand. The events have already started on Monday and will culminate in a televised Macy’s Fourth of July Fireworks special on Saturday, at 8 p.m. ET on NBC.

Every year there is a grand spectacle held at the Walt Disney World Resort. But this year, the Covid-19 Pandemic has forced a halt to any crowd gatherings. Walt Disney is revisiting an unforgettable night of magic from 2018 with its spectacular Fourth of July fireworks.

4) Famous eateries and fast food joints have continued with their holiday offerings.

Oreo has many patriotic-themed offerings, including the triple stuffed cookie in red, blue, and white.

The Cheesecake Factory throughout the week leading up to Independence Day is offering two double cheese “Happy Hour” burgers, two orders of fries, two soft drinks, and one slice of Oreo Dream Extreme Cheesecake for just $20.

Tim Hortons U.S. is celebrating Independence Day on July 4 by offering a themed DIY donut kit for guests to decorate their own red, white, and blue patriotic treats.

Major league basketball traditionally marks the season with patriotic merchandise and a big baseball game, but things are not working out as they wanted, even with an empty stadium.

There will be no baseball, hot dogs, apple pie, and Chevrolet this year for America.

6) Budweiser Beer commercials are on

The commercials are on for the traditional cookout and beer. Budweiser being a favorite has gone all out with its advertising for 4th of July celebrations in 2020. They have come up with a collectible special in the tri-color. A portion of sales will go to the Folds of Honor charity. The collectible cans will be available from Memorial Day until July 4th.

The COVID-19 pandemic has seen a resurgence in recent weeks and talks of normalcy are still far away, even with the vaccinations. For invest...
23 hours ago

Credit rating agencies are risk assessment firms that provide ratings on the creditworthiness of bonds and other debt instruments. Investor...
23 hours ago

Microsoft Corp. is joining hands with Cruise, the self-driving subsidiary of General Motors., to help accelerate the commercialization of dr...
2 days ago