Crime spree by Wall Street’s biggest banks is not only ongoing but getting worse, says financial watchgroup group Better Markets.

It’s no secret that big banks, which control all financial and political activity on Wall Street, could have averted the Financial Crisis of 2007 – 2008. One would think that the 18 months’ long recession would be enough to encourage ethical behavior, and yet here we are. Much of the global financial sector is rife with systematic fraud as it was before the collapse of Lehman Brothers. A report on the six largest U.S. banks’ criminal records exposes an industry culture that still tolerates or even encourages illegal activity in this race to control world markets.

The financial watchdog group Better Markets has amassed a decades-long RAP sheet that would have merited putting the banks out of business and their executive behind the bars. “The crime spree by Wall Street’s biggest banks is not only ongoing but getting worse,” the report reads.

The depth, breadth and scope of the illegal activity carried out by Bank of America, Citigroup, Goldman Sachs, JPMorgan Chase, Morgan Stanley, and Wells Fargo is unfathomable. They have been fined a cumulative total of $195 billion since 2000 in major legal actions. In the past several weeks, Goldman Sachs was fined $2.9 billion in foreign bribery case; JPMorgan Chase paid a record $950 million for manipulating two different financial markets for 7 and 8 years respectively; Citigroup was fined $400 million for unsafe and unsound banking practices, including its repeated failure to detect money laundering. 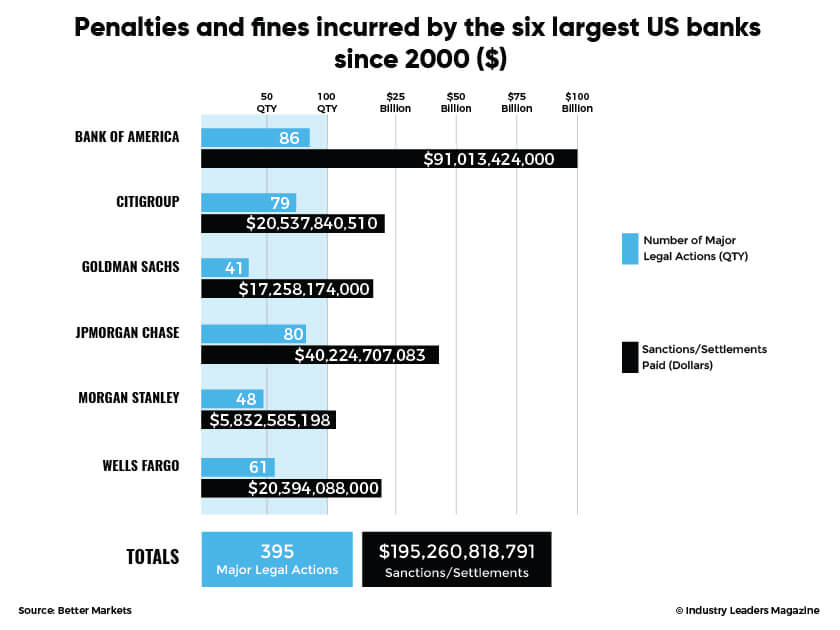 The report concludes that “the Six Megabanks have not skipped a beat when it comes to committing fraud, market manipulation, and other abuses against their clients, investors, and the financial markets themselves. They continue to violate the law to generate massive profits and huge compensation packages for their executives, without facing any meaningful punishment, deterrence, or accountability.”

Most of the cases that emerged in 2020 showed that banks were repeating mistakes, said Dennis Kelleher, chief executive at Better Markets.  “If they were held to higher standards they all would have been put out of business because the recidivism is really quite shocking.”

In most cases, banks deny the wrongdoing alleged by prosecutors and regulators, although guilty pleas have become more common.

Anna Domanska
Anna Domanska is an Industry Leaders Magazine author possessing wide-range of knowledge for Business News. She is an avid reader and writer of Business and CEO Magazines and a rigorous follower of Business Leaders.
« Project Titan by Apple is a move to take on Tesla in the field of automobiles
Iconic Women & Their Gems and Jewels »
Leave a Comment
Close