Apple Teams Up with HPE To Boost Enterprise-Related Operations

Mirror, mirror on the wall; who’s the fastest of them all ?

Before Hennessey’s dream machine, the Venom GT was introduced, no one would’ve dared question the Bugatti Veyron’s supremacy where being the world’s fastest, hottest, best-looking car was concerned.

Seems like John Hennessey has had enough of that.

The guy who’s known for turning fast cars into absurdly fast cars has created Bugatti’s worst-ever nightmare. The Venom GT, at 1200 bhp and 1200 kg makes the 267 mph, 1888 kg Veyron, who until now was the big boy bully amongst all of the world’s fastest, slickest cars, seem slow and heavy!

Who would’ve thought the Veyron would meet his nemesis already ?

Back from its show down with the Bugatti Veyron at the Goodwood Festival of Speed, where the Veyron shied away from competing with the Venom GT, this supercar was unveiled by Hennessey Performance (HPE) August 17, 2011 at the McCall’s Motorworks Revival held at the Monterey Jet Center. 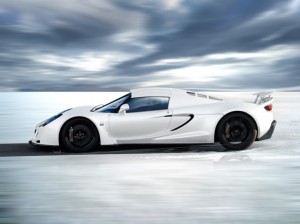 With the goal behind building this car being to produce “The best overall performing and best looking road-legal supercar we could build.”, HPE president and founder, John Hennessey, says, with something much like the pride of a new father; “Twelve hundred horsepower combined with in a mid-engine chassis that weighs twelve hundred kilos (2,685 lbs) – no other road car and only a handful of race cars can match the power to weight ratio of the Venom GT.”

“It is a driver’s car, a supercar with a soul that will give you as much speed and performance as you dare ask of it”, he adds.

Priced at US$950,000, Hennessey will build only 5 Venom GTs every year, at either one of the company’s three facilities:  Texas, California and Silverstone, England. The hand-built supercar, currently one of the world’s most exclusive, is available in right or left hand drive, with the right hand drive option costing an extra US$28,000.

With a pick-up that goes from zero to 200 mph in an absolutely incredible 15.9 seconds, the Venom GT is being touted as being “the next fastest thing to a F1 car”.

Featuring a new sub-frame so that the engine and gearbox fit into the car, the Venom GT has a projected top speed of more than 260mph.

The dream of building the Venom GT was born when, in 2007, Hennessey’s Venom 1000 Twin Turbo Viper posted the quickest time of the day by running 0 to 200 mph in an astonishing 20.3 seconds and was crowned king of the ROAD & TRACK “Speed Kings”. In comparison, the 2nd place Bugatti Veyron 16.4 was nearly 4 seconds behind the Venom with a time of 24.2 seconds.

This is when John Hennessey started thinking about building a car that would be significantly lighter than the 3500 lbs heavy Viper, and yet remain a street car with a full interior, air-conditioning and the works.

Reminiscing about how the Venom GT was born, Hennessey says, “One day I joked about putting the Venom 1000 Twin Turbo engine in the back of a Lotus Exige. Then I thought, let’s do a sketch and see what that might look like. When I saw the sketch I stopped laughing and really started to seriously think about this idea. We then had a few more detailed renderings made. And when I saw these drawings, I thought to myself, we can build this car with 1000+ hp and a weight well under 3000 lbs.”

The rest, as they say, is history. And is now being showcased in the form of the Hennessey Venom GT; the first car in a long, long time that makes the Bugatti Veyron looks insignificant.