BBM’s Next Update to Add Several New and Exciting Features!

In a bid to introduce new features and characteristics to BBM, Blackberry has now announced that it will soon support photo-sharing in multi user chats. The new additions comes as an expansion to existing photo sharing options in multi-user chats, sending voice notes, location sharing powered by Glympse and sending files from Dropbox to user’s account. 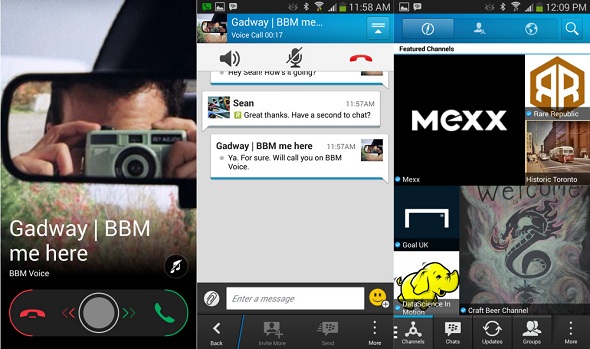 Blackberry last month announced at the Mobile World Congress that it will be releasing BBM service to Microsoft’s Windows Phones as well as the recently released Nokia X in the coming months.

Blackberry’s Head of Product & Brand Marketing, Jeff Gadway announced in the company’s blog post that historically the file sharing limit has been set at 6MP, which soon will be expanding to 16MB in the next release of BBM. It implies user will soon have the ability to send bigger pictures, documents and much longer videos.

For instance, the 6MB transfer limit allows users to send approximately 6 seconds of 1080p HD video. But with the 16MB increase, user will be able to send 16 seconds of video using the same setting. The company is also rolling out an expansion in the span of largely popular emoticons.

Blackberry last month announced at the Mobile World Congress that it will be releasing BBM service to Microsoft’s Windows Phones as well as the recently released Nokia X in the coming months. BBM will be available as a free download from the Windows Phone Store this spring, while BBM for Nokia X will be available from the Nokia Store.

BBM also recently rolled out major upgrades for its iconic BBM app for iPhone, Android and Blackberry. One of the most prominent addition as a major aspect of the update was the addition of BBM Voice for Android and iPhone users.

The company recently announced BBM protected eBBM Suite, a secure version of the instant messaging system. eBBM Suite encrypts messages and logs them on a central server for auditing and compliance purposes.

Speculation about turning BBM into a mobile payments platform has been going around for a few weeks. BBM is set to launch a mobile banking system in Bangladesh.