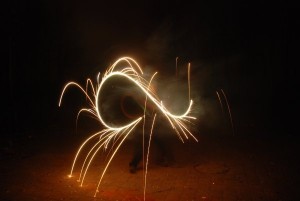 A Taiwanese start-up has developed an innovative replacement for text passwords: “AirSig”. The idea behind AirSig is that it lets users wave their gadgets around in any particular defined motion, something along the lines of a magic wand as a means of a secure password.

The breakthrough technology utilizes gyroscopes, which are usually found in smartphones and other forms of wearables to carry out various tasks right from authenticating ID to unlocking the device, paying for online transaction to remotely opening doors and playing games.

Users can store all their passwords inside a wallet app, which would require a unique AirSig motion (password) to get access to the stored passwords.

The technology isn’t replacing passwords; it’s simply protecting them in such a manner that losing them or getting hacked is next to impossible. In recent times, biometric authentication – utilizing a person’s physical attributes to identify to secure access has gained momentum. We have already witnessed the arrival of fingerprint sensors in the iPhone 6 and Galaxy S5 that gives you access to your device. Furthermore, this summer, Samsung has hinted that its upcoming mobile devices will be equipped with a unique retina scanner.

Facial and voice recognition technologies have existed in the commercial market for a long while, yet have been hindered to a limited extent because of poor sensors and low camera resolution. Nevertheless there has been quite an advancement in technology in recent years.

“This field is very important because passwords definitely don’t work,” says Johannes Ullrich, director of SANS Internet Storm Center, a cyber threat -Internet security monitor and alert system. “Biometrics is the closest thing you have to real-world authentication where people recognize people by their looks.”

Imagine a scenario where, rather than a password, you had a ‘‘passthought’’. UC Berkeley educator John Chuang has invested more than three years taking a shot at an approach to utilize people’ brainwaves as a method for authentication. “No two peoples’ brain structure is the same, even if they’re identical twins,” explains Chuang, who intends to create an authentication system based on his findings and make it available to general public. Chuang conducted a research where individuals were asked to think about anything specific but keep it a secret – dancing to ‘dancing in the moonlight’ or ‘going snowboarding’. Their brainwave activity was as unique as a fingerprint, which someday in the distant future could be used as a ‘‘passthought’’.

The only downside test for the Nymi, AirSig, or other existing authentication systems is in its worldwide adoption. AirSig has been downloaded over 9,000 times and has still a long way to go before its technology is recognized globally. Unless tech giants like PayPal and Google lets users authenticate using such technologies, we’ll still be stuck in an age where we’re vulnerable to dangers posed by pregnable text password system.