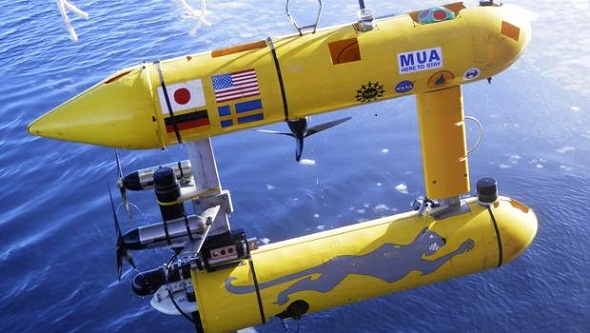 Scientists use the satellites orbiting around the planet to communicate with the robots currently.

After being inspired by Star Trek’s Enterprise, Engineers at the Massachusetts Institute of Technology (MIT) have developed autonomous robots that will be able to work on their own underwater. The robots can not only perform tasks underwater, but also is capable of making high-level decisions to ensure successful execution of its missions.

Typically, robots require predetermined actions written or low-level commands fed by programmers. The vehicles won’t possibly know how to proceed or the duration of stay underwater unless the script provides that information. And for unanticipated events, the robots are not equipped enough to alter the programme and complete the task. The next alternative is for a person to remotely control the underwater vehicle, but it wouldn’t be autonomous underwater vehicles anymore, defeating the purpose.

Scientists use the satellites orbiting around the planet to communicate with the robots currently, however, the signals cannot always penetrate deep into the ocean limiting the use and effectiveness of the robots.

Having understood these challenges, the MIT engineers built an underwater robot that won’t have these issues. The MIT team’s autonomous underwater vehicles (AUV) are equipped with an autonomous mission-planning system that enables it to plan and execute its own missions. They are assigned certain specific tasks, making their decisions simpler. The system would have choices, like either going to a location and map it out or communicate through a satellite link, for example. In an unforeseen situation, the team has programmed it to decide either to drop the mission or tweak the plan.

Additionally, the autonomous underwater vehicles could be used to explore dangerous situations deep underwater, where humans would physically be unable to reach. The underwater robot was tested for three weeks off the western coast of Australia and the engineers will make a presentation on the mission-planning system in June at the International Conference on Automated Planning and Scheduling in Israel.

Brian Williams, the principal developer of the mission-planning system and professor of aeronautics and astronautics at MIT had developed a similar system which could diagnose and repair problems on its own when he was working for NASA in the 1990s.

Williams said in a news release that the team wanted to show that these vehicles could plan and execute missions and also adapt on their own without any human intervention.

The autonomous underwater vehicles higher-level decision-making would free engineers to think and develop new research strategies. Such a system can also help reduce the manpower needed on research operations.

Anna Domanska
Anna Domanska is an Industry Leaders Magazine author possessing wide-range of knowledge for Business News. She is an avid reader and writer of Business and CEO Magazines and a rigorous follower of Business Leaders.
« Microsoft investing in underwater cables to connect datacenters worldwide
Facebook increased contractors’ minimum wages to $15 per hour »
Leave a Comment
Close