Audi, which began its electronic journey in 2018, is introducing smaller alternatives to the E-tron Sportsback SUVs with the concept Q4 E-tron Sportbacks.

Electric vehicles are getting a great push and heavy makeovers after Tesla made driving electric cars fashionable. Audi, which started its electronic journey in 2018, is introducing the smaller alternatives to the E-tron and E-tron Sportsback SUVs with the concept Q4 E-Tron Sportsback that premiered on Tuesday.

The Audi Q4 Sportback e-tron concept offers an advance look at what will already be the seventh series production electric vehicle that the manufacturer will introduce by 2021.

The Sportsback is a “sexy back” coupé version of the Q4 E-Tron SUV with a more sporty look—a sloped roof and a sleeker behind.

It comes with Audi’s modular electrification platform (MEB), meaning the Sportback will pack an 82 kWh battery with 280 miles (WLPT) of range. Two electric motors mobilize 225 kW of system output in the Q4 Sportback e-tron concept that can propel it from 0-62 mph in 6.3 seconds. 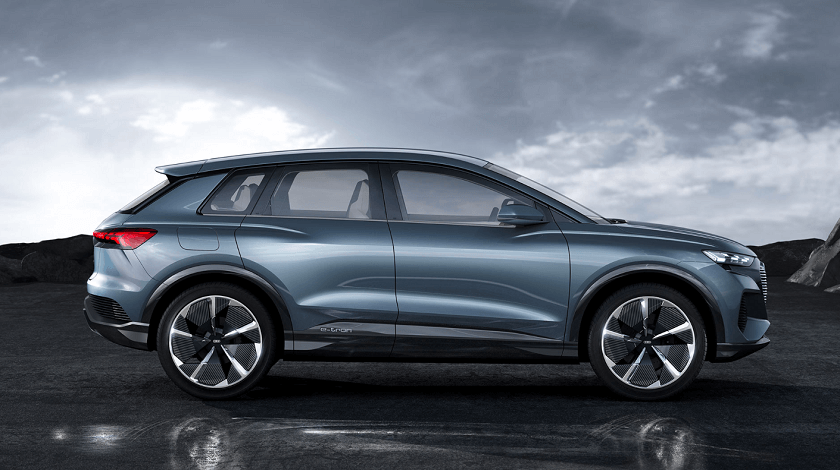 The Sportsback is a “sexy back” coupé version of the Q4 E-Tron SUV with a more sporty look—a sloped roof and a sleeker behind.

The battery capacity is 82 kilowatt. It has a range of over 450 kilometers, well within the WLTP range, and sets the benchmark in its class, or so Audi claims.

Versions with rear-wheel drive will offer a range of over 500 kilometers in accordance with WLTP.

As a marker of the E-Tron brand extension, there is a striking broad light band that connects the two lamp units on the rear end of the Audi Q4 Sportback e-tron, similar to the SUV. The striking design of the bumper diffuser unit with its horizontal slats and the illuminated e-tron logo in the middle is an element that the two Q4 versions share.

The front carries the iconic four rings logo of all Audi vehicles. To mark its electric vehicle identity, the new concept vehicle also features a structured closed surface within a broad, almost upright octagonal frame in place of a traditional radiator grille.

Large 22-inch wheels leave no doubt as to the potential of the newest member of the Audi family.

The Q4 Sportback e-tron concept offers unsuspected spaciousness and comfort, especially in terms of legroom at the front and even more in the rear.

The interiors come in light warm colors, which emphasize the spaciousness. Sustainability is the top priority, not only in terms of the electric drive in the Audi Q4 and Q4 Sportback: The floor covering is made of recycled materials. Four seats with integrated head restraints are upholstered with comfortable Alcantara material. Double seams stitched with thick yarn adorn the upholstery.

The Audi virtual cockpit has all the display elements for speed, charge level, and navigation. The large-format head-up display with an augmented reality function is a new feature. It can display important graphical information, such as directional arrows for turning.

Touch control panels on the steering wheel spokes can be used to select frequently used functions. The center console has a 12.3-inch touchscreen.

The center console has a spacious storage compartment that includes a cell phone charging cradle. There are other storage pockets in the doors.

The modular electrification platform (MEB) offers a broad range of drive variants and power levels. The front and rear axles are each powered by an electric motor – this Q4 Sportback is a quattro. Electronic control ensures that the torque distribution is coordinated optimally, and it does so in fractions of a second. That enables the SUV Coupé to achieve optimum traction in all weather conditions and on any type of surface.

The battery in the vehicle floor stores 82-kilowatt hours, which allows for a range of more than 450 kilometers (279.6 mi) according to the WLTP standard.

The battery is charged with a maximum of 125 kilowatts. It, therefore, takes little more than 30 minutes to reach 80 percent of the total capacity. The Audi Q4 Sportback’s drag coefficient is 0.26.

The battery system weighs 510 kilograms. The center of gravity of the Audi Q4 Sportback e-tron concept is similar to that of a sedan with a conventional drive system.

Audi hasn’t released pricing for the Q4 Sportback E-Tron yet. The regular Q4 E-tron model is expected to cost around $45,000, so the Sportback version should be around that price too.

Audi launched its electric vehicles with the world premiere of the all-electric SUV Audi e-tron in September 2018. By 2025, Audi will offer more than 20 automobiles with all-electric drive. The SUVs within this portfolio include the e-tron and the e-tron Sportback. The Audi Q4 Sportback e-tron concept offers an advance look at what will already be the seventh series production electric vehicle that the manufacturer will introduce by 2021.

Anna Domanska
Anna Domanska is an Industry Leaders Magazine author possessing wide-range of knowledge for Business News. She is an avid reader and writer of Business and CEO Magazines and a rigorous follower of Business Leaders.
« 2020 Ferrari F8 Spider Review
Allstate Acquires National General for $4 billion in an all-cash deal »
Leave a Comment
Close