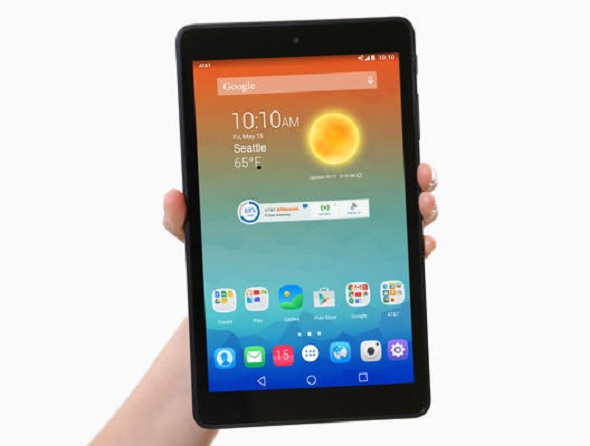 Trek HD 4G LTE, it’s a mid-range tablet and the first to run Android 5.0 Lollipop out of the box.

Telecommunications giant AT&T announced a new tablet launching this week. Dubbed the Trek HD 4G LTE, it’s a mid-range tablet and the first to run Android 5.0 Lollipop out of the box.

AT&T is positioning the Trek HD as a tablet that can be used in small groups. For instance, people can watch movies with friends on a road trip. They could also discuss documents with co-workers. The device provides a multi-user setting that allows inclusion of individual accounts on the tablet for family and friends.

Jeff Bradley, senior vice president of Device Marketing and Developer Services at AT&T Mobility said that the Trek HD is a huge step forward for the carrier in terms of developing affordable devices with premium features.

The Trek HD sports an 8-inch 720p display, 1.6GHz quad-core Snapdragon 410 processor with a 5-megapixel camera on the rear and a 2-megapixel front-facing shooter for video calls on the other side. As the name suggests, the AT&T tablet offers LTE connectivity and weighs around 12 ounces (340 grams). Other features include 16GB of internal storage with a microSD slot that allows for cards up to 32GB and a hefty 4060 mAh battery for up to 8 hours of continuous use.

The Trek HD earned 3 stars (out of 5) on the AT&T Eco-Rating 2.0 system, which is worth a mention. While AT&T has not mentioned as to which company manufactured the Trek HD, it’s believed to be one of its China-based partners, possibly the ZTE, though there is no confirmation on the report.

Beginning Tuesday, May 12, Trek HD will go up for sale in its online store, AT&T confirmed. Those consumers that want to check it out in stores first, will have to wait until Friday, May 15. Pricing is set at $49.99 with a new 2-year agreement or for people preferring monthly instalments will have to pay $10 monthly over 20 months on AT&T Tablet Installment plan. Mobile Share Value subscribers can add the tablet to their plan for only $10 per month.

The carrier has also announced that it is launching Rollover Data to prepaid subscribers. The new initiative was introduced in late January, letting subscribers to use any data that is leftover from the previous month into their next billing cycle. Each rollover can last up till a month.

Anna Domanska
Anna Domanska is an Industry Leaders Magazine author possessing wide-range of knowledge for Business News. She is an avid reader and writer of Business and CEO Magazines and a rigorous follower of Business Leaders.
« The unique EO Smart Connecting Car 2 can shrink and drive sideways to park in any tiny space
Alibaba Group to set up IT Joint Venture Deal With Dubai-Based Meraas »
Leave a Comment
Close