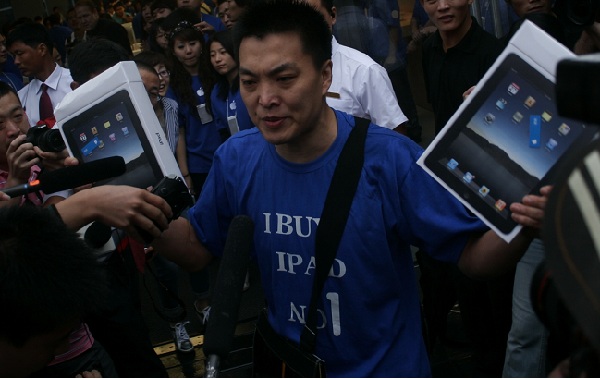 According to the reports released on Friday, Apple Inc has staged a low key launch for iPad 3 in the market of China. It was clean and free of the chaotic scenes and hustles that accompanied some of the previous product launches for the tech darling. China has been always been the most promising market for Apple in terms of growth and fame.

Many of the Apple fans in China were amazed at the discipline and silence at the launch of their latest product. The well maintained and ordered queues at Beijing and Shanghai caught the Apple fans by surprise who are used to watching huge snaking queues of scalpers standing overnight to lay their hands on the product. Sun Xufei, an IT professional who was the first person in a small line of at most around 20 people commented that he was very much surprised at the fact that was no line. He added that he had come a bit earlier at the Lujiazui Apple store in Shanghai with the expectations of finding a much bigger line.

The latest iPad 3 from Apple that features a much sharper display and a better quality of camera than all its previous versions of the highly popular tablets has arrived weeks after Apple has paid 60 million dollars to a company based in Shenzhen, in order to settle a trademark dispute over the name of the iPad. This time around Apple had adopted an online system of reservation for its customers so as to avoid the chaos that occurred at the time of the launch of the iPhone 4S back in the month of January and which could very well happen during iphone 5 release soon. This measure helped them to control the flow of people in the Apple stores at the time of launch. Back in January Apple had a bad experience when scalpers pelted one of its flagship stores in Beijing with eggs and the situation turned really bad. The method adopted this time by Apple is much sensible and better since time is precious for everyone, according to a 33 year old entrepreneur named Zhong.

The market of Apple in China:

Apple has a couple of retail stores in Beijing, one in Hong Kong and three in the city of Shanghai apart from a network of authorized resellers. According to the opinion of the Chinese Government Apple is aiming to open two more retail stores in the major cities of Shenzhen and Chengdu. The demand for the products of Apple is in such a high that many people even buy them from the unauthorized resellers who either peddle the smuggled goods or get them from the online stores selling imports. China is the key place for the growth of Apple and according to the opinion of Tim Cook, the CEO; they have only just scratched the surface of the region. The sales of Apple products have increased threefold in the areas like mainland China, Taiwan, Hong Kong and Greater China amounting to about 7.9 billion dollars in the second quarter that ended on the 31st f March.