Apple Woes; How Long Will it Last? 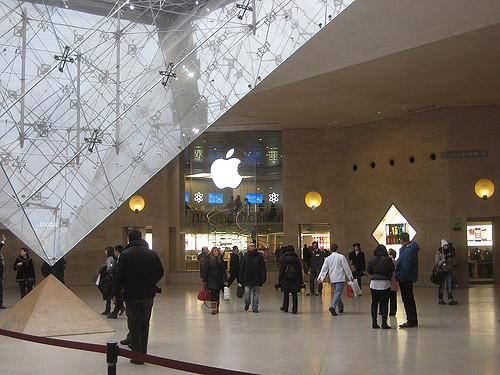 The Apple Store inside the Louvre Carousel

There’s an old saying, it’s the best time to strike an enemy when they are at the weakest. Samsung, probably, has taken the thought into consideration as a chunk of strategic advice when it comes to surpassing Apple to take the throne of global smartphone leader. If you’ve followed Samsung sales report recently, then you’re probably aware of the critical success, which has graced the company following the release of Samsung Galaxy S7 and Samsung Galaxy S7 Edge.

Well, apart from returning the old fame as the smartphone leader, the strong success has started to boost its finances. Yes, the Korean multinational smartphone manufacturer has nailed it this time. A massive momentum has been established and the sale for Samsung Galaxy S7 lineup is certainly going be at the top of the world this quarter. And, of course, the next in line by the flagship, Galaxy Note 6, is gearing to rule the next quarter, unless its archenemy Apple comes up with a brilliant strategy.

Let’s just say that Apple is struggling like never before this year. Despite the launch of a high-end lineup of the iOS flagship, the Apple sales report is highly upsetting. This March, Apple revived the 4-inch model, iPhone SE, by adding the high-end features, but the model failed to perform as per the expectation in the smartphone market. More importantly, the ascendancy of Android-based smartphone leader, Samsung, is kicking in just when Cupertino, California-based iOS king lands into one of the roughest periods of the decade.

In 2014, the launch of iPhone 6 shook the profit center of Korean smartphone maker so badly that the Samsung sales report saw a drop of 73.9% in the mobile profits the following year. Also, the flop model, Galaxy S6, added more to the misery of Samsung and crashed the fame of Android-based smartphone leader almost to the ground.

Since then, the company has struggled hard to bring progress back like its previous profits in the smartphone business. The overall profits are merely 68% of what Samsung had earned in the second quarter of 2014, but the smartphones manufactured by the company involves only a little contribution. That’s correct, the immense success of latest S7 family release has very little to do with the stability. The major operating profit arrives from Samsung Electronics division, as it reports 6.68 trillion while the Samsung sales report for mobile division reports operating profit of 3.89 trillion.

The Apple sales report suggests that overall operating reports for the company this quarter has been $13.987 billion (23.5% down from the previous year’s same quarter). But the good thing is, despite the rough patch through which Apple is struggling due to the drop in iPhone, Mac, and iPad sales, Samsung IM is making only 24% of iOS giant’s operating profit, even if it’s trading 60% more phones. Samsung shipped 81.9M smartphones as compared to 51.2M iPhones shipped by Apple.

So, Apple is not the only one struggling. In 2016’s first quarter, Korean smartphone giant shipped 81.9M smartphones, down from 82.4M in last year’s same quarter. In fact, the decline for Samsung would’ve been larger had it not released the championing flagship lineup, Samsung Galaxy S7, and Samsung Galaxy S7 Edge. The launch of new smartphone resulted in a vigorous sale during March.

According to Apple sales report, the iPhone sales witnessed a massive drop of 51.2M from last year’s 61.2M sales in the same quarter of previous year. Tim Cook’s company was hit by smartphone sales debacle due to lack of fresh features in its iPhone lineup 6S and 6S Plus. It dissuaded major iPhone users from upgrading.

If we look at the current quarter, Apple has performed well in the land of dragons. The iPhone maker has strengthened its grip on the high-end smartphone economy in mainland China. In March, a report showed, merely a day after Apple reported its growing sales number in China for the quarter, the investors and shareholders were sent into a tailspin.

Apple saw a hike in its on-quarter share of the market by 0.94% for mobile devices priced $308 (2,000 Yuan) and above from the beginning of the year to the end of March 2016. The share increase for Apple from January to March is much lower than the first quarter of 2015 in China where the company added additional 2% market share. Generally, the addition of low market share results into lower sales. Of course, this doesn’t mean that iOS giant is not performing well in China. The Chinese market still remains a hot spot for iPhone, where iOS devices are the ultimate choices for premium smart device users. Apple performance has been best in tier 1 cities of China, a place where consumers are more concerned about the ‘style and premium quality’.

For global market share except China, well, we do not know when exactly the miseries of Apple will arrive at an end. For some time now, we’re bound to hear ‘Samsung beats Apple’ or Samsung is back at its throne as smartphone leader, but will Samsung continue with its current track? Only time will tell.