Apple vs. Microsoft: The Real History

One was an iconoclastic Baume and Mercier-sporting salesman while the other was an exceedingly good computer programmer and entrepreneur. Their paths would have never crossed had it not been for some common interest and an impending strategic alliance. Industry Leaders Magazine revisits Apple vs. Microsoft rivalry, one where a sappy relationship quickly descended into a hate-fueled business rivalry. 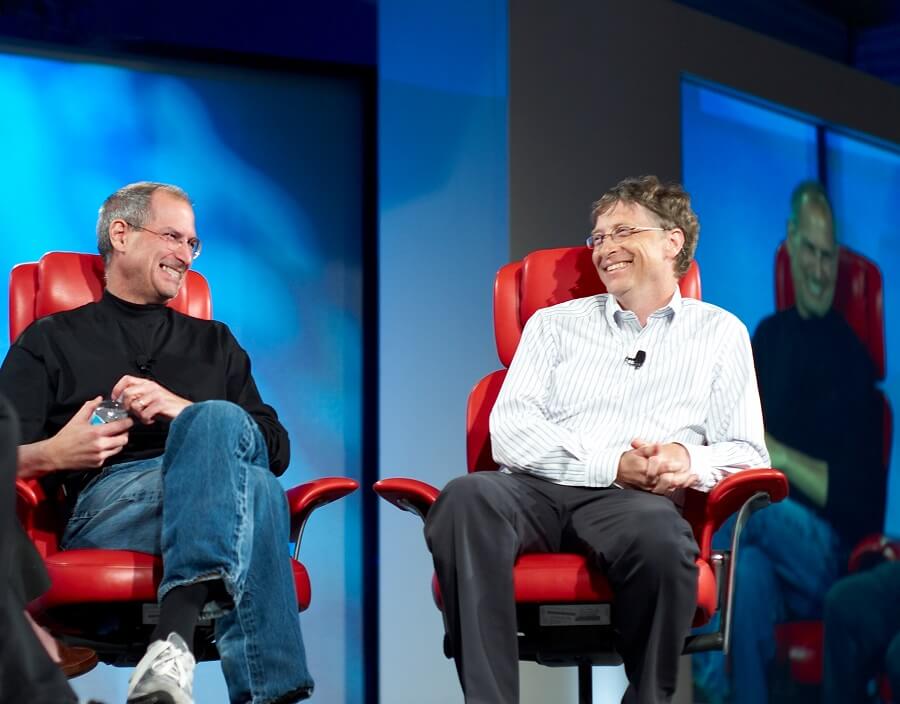 Apple and Microsoft both were founded in the late 1970s. Microsoft in its nascent years was interested in developing computer software while Apple was designing state-of-the-art desktops. It may come as a surprise but both were critical allies when Microsoft software programs supported the running of Apple’s Personal Computers.

This was a time when Bill Gates and Steve Jobs weren’t sworn enemies. Bill Gates would routinely fly to Cupertino to see what Apple was working on. However, the sappy relationship turned sour during one such visit when Steve Jobs flew to meet Bill Gates on the possibility of making Microsoft Software for the Apple Macintosh computer, with its newly invented Graphical User Interface (GUI). Gates wasn’t particularly impressed with appeared in front of him – neither the GUI nor Jobs’ attitude.

Years later Gates would be quoted in Steve Jobs: The Exclusive Biography by Isaac Walterson saying, “It was a weird kind of section visit, where Steve was saying, ‘We don’t really need you and we’re doing this great thing, and it’s under the cover.’ He’s in Steve Jobs sales mode, but kind of the sales mode that also says, ‘I don’t need you, but I might let you be involved.’”

Time and again, both the startups observed overlapping of business interests and soon entered into a fierce business rivalry. The following are the various lesser-known facts about Apple vs. Microsoft rivalry. 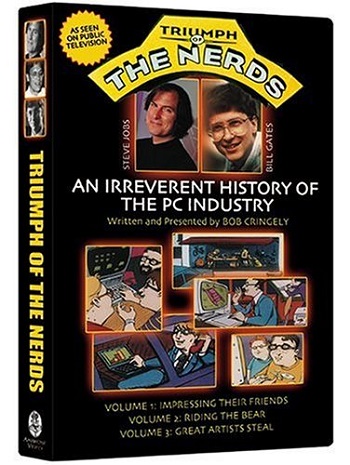 “Triumph of the Nerds” a TV documentary about the history of the computer industry. (Image Credit: Amazon)

Steve Jobs had quite a lot to say about Microsoft’s products for the TV documentary ‘Triumph of the Nerds.’ According to Jobs, Microsoft had “absolutely no taste” and that they made “really third rate products.”

Steve Jobs’ back-handed compliments didn’t stop as he called Microsoft Corp. an opportunist whose products “lacked insight and creativity.” Here’s the quote in its full glory.

Steve Jobs: “The only problem with Microsoft is they just have no taste, they have absolutely no taste, and what that means is – I don’t mean that in a small way I mean that in a big way. In the sense that they don’t think of original ideas and they don’t bring much culture into their product ehm and you say why is that important – well you know proportionally spaced fonts come from type setting and beautiful books, that’s where one gets the idea – if it weren’t for the Mac they would never have that in their products and ehm so I guess I am saddened, not by Microsoft’s success – I have no problem with their success, they’ve earned their success for the most part. I have a problem with the fact that they just make really third rate products.”

In ‘Creating Jobs’ a 1997 interview with NYT, Steve Jobs said he called Bill Gates to apologize, but he told him he “believed every word of what I’d said but I that I never should have said it in public.”

Bill, thank you. The world’s a better place: Steve Jobs 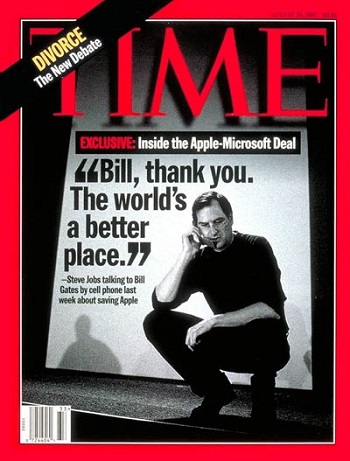 Even with the ongoing rivalrous Apple vs. Microsoft relationship, not much love was lost. In August 1997, Apple’s stock price descended to 88 cents. Bill Gates stepped in and saved Apple, which at the time, was on the brink of bankruptcy.

Microsoft Corp. agreed to pump $150 million in Apple stock. The controversial cash fusion worked and the value of Apple actually peaked back in 1999.

It is observed that if Microsoft had not taken out its shares at that time than today it would have earned $21.86 billion from its $150 million investment.

Even today, Apple vs. Microsoft rivalry is as passion-fueled as it was forty years ago. In the year 2016, Microsoft introduced a new Surface-branded lineup aimed to target Apple customers. This lineup came with a touch screen and a stylus and aimed to drive Apple’s high-end MacOS-powered laptops out of business. Apple fought back and by introducing laptops just weeks after to show Microsoft that it hadn’t yet given up.

Microsoft Corp. entered the mobile selling business to offer an alternative to Apple and Google. Its ambition was quite lofty; one that prompted the Redmond-based giant to buy Nokia. This was at a time when the smartphone market was confirmed to be a total iPhone and Android duopoly with an estimated 96.8% market share. As one could expect, no miracle was registered at Microsoft headquarters. Lumia mobile phones failed miserably and so did Microsoft’s plan to take on iOS and Android smartphones.

Some of these short tales have shown that as long as Apple and Microsoft remain in existence, so will the hate-fueled Apple vs. Microsoft rivalry.

Anna Domanska
Anna Domanska is an Industry Leaders Magazine author possessing wide-range of knowledge for Business News. She is an avid reader and writer of Business and CEO Magazines and a rigorous follower of Business Leaders.
« Highly Successful People Who Wake Up Early
Tesla Cybertruck will join Dubai’s police fleet »
Leave a Comment
Close