Several brands at the upcoming Geneva Motor Show will be incorporating Apple’s ‘CarPlay’ including Ferrari, General Motors, Honda, Hyundai, Jaguar, Mercedes-Benz, Nissan and Volvo. Apple is currently working with car makers on developing and installing an on-board operating system, which a number of manufacturer’s are expected to, adopt.

In June 2013, Apple had announced that its operating system in the car – named CarPlay, will have iPhone like function through a mounted dashboard. It will also let drivers access their music library, maps and traffic information; phone-dialing and call-receiving facilities as well as the iMessaging system. It will also be incorporated with the famous voice-activated Siri personal assistant system. 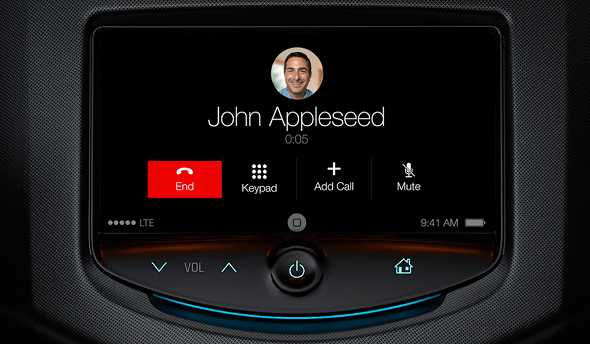 Apple released few screenshots of CarPlay; although not much light has been thrown on which version of its iOS operating system will it be based on. However, speculation about the latest iOS 7 which is compatible with the latest iPhone has been surfacing.

One of the most fundamental functions of CarPlay integration is to make sure that the drivers aren’t sidetracked while driving to reduce risks of accidents. Personal assistant system Siri will make certain that drivers don’t take their eyes off the road by providing a hands-free, eye-free experience.

CarPlay will make driving more intuitive by Maps to foresee destinations based on recent trips via contacts, texts, and emails and will provide directions; traffic conditions information as well as ETA.

CarPlay will also let drivers access their iTunes Music Library, podcasts, and audio books. Apart from that, it will also support a few third party audio-apps such as Spotify and iHeartRadio.

Apple recently added Siri integration to a few General Motors models. More and more technology giants are offering operating system based for cars with integrated entertainment and information services, at the same time keeping drivers connected with the internet.

Currently Google is working with Audi of Volkswagen AG to develop its on-bard operating system. Microsoft is also said to have teamed up with a few automakers including Ford, to create its own infotainment system with navigation, apps and other facilities.